The discipline mixes elements of team specialties such as football, basketball and rugby, but without balls. On the contrary, they use a flying disc and innovative values

The ultimate, or ultimate frisbee as it is also known, is a sport that apparently has the ability to love those who begin to practice it. But what is special about it? At first glance it could be for the novelty that implies playing with a record, or perhaps for the sporting spirit that characterizes it, as it does not use judges.

LosQuijotes.es refers that the origins of the ultimate go back to the decade of the sixties in the university environment of the United States, and to the 80s in Europe. In Spain, for example, it was introduced in the 90s, and there are already more than 15 clubs with 350 players throughout the country.

Other details you should know

The ultimate has among other advantages that you can play mixed. That is, there are categories for women, men and mixed, something that is not seen in any of the other similar sports already mentioned. In the same team men and women can play: 4-3 if it is in grass (7 against 7), or 3-2 if it is done in beach (5 against 5).

LosQuijotes.es account that this discipline is played with a disc in a field of grass or on the beach. At the two ends of the field are the goal areas and the goal is to bring the disc to those areas only with passes, does not allow to run with the disc in your hand, that is, you can not be individual, and you have to avoid the disc touches the ground. In addition to avoiding the interception of the pass by the opposing team. 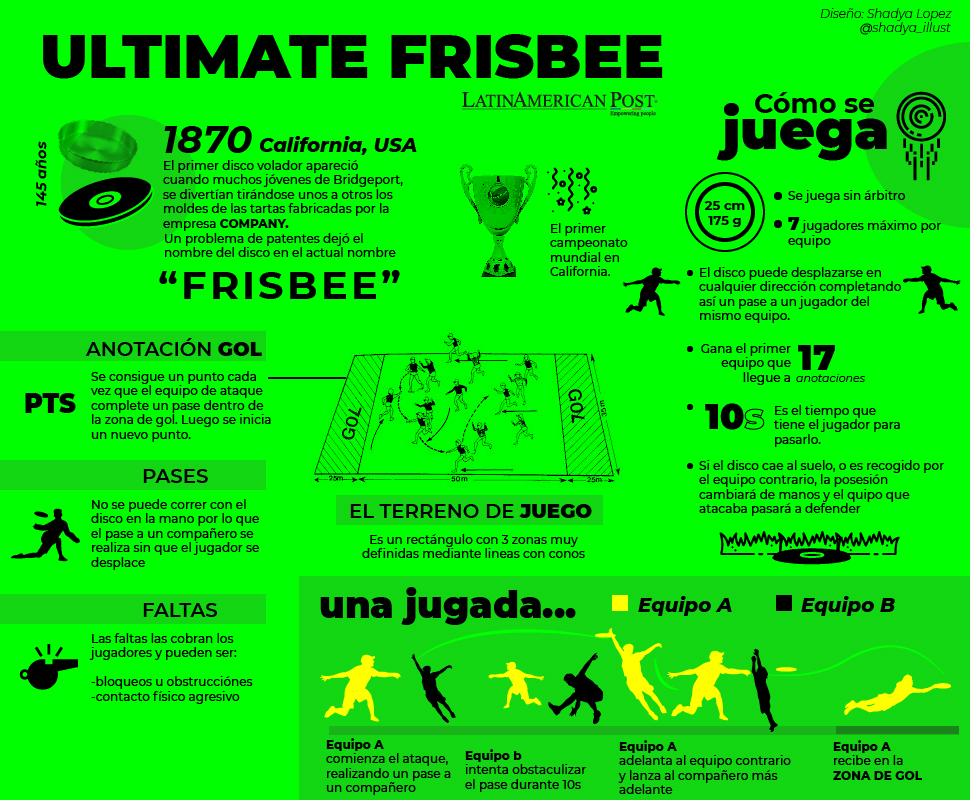 The aforementioned article reviews some regulations, such as the pitch, which is rectangular in shape with 64 meters in length, plus a branded area on each side. Which in turn measures 18 meters each, to add 100 meters in total.

LatinAmerican Post spoke with Vanessa Rincones, director of the JUF Organization (Play Ultimate Frisbee) and with Chilean players Adleny Nieves of Club Gravedad Cero and Consuelo Toro, of Frisbulls Ultimate Club, who expressed the reasons why they love this sport and recommend playing it .

Maybe you're interested in reading: From Cuba to the world: The marathon of Havana is here!

On the powers and Latin America

Vanessa Rincones is a Venezuelan leader, who has lived in Mexico for many years, and the first thing she reported after the completion of the Junior World Cup in Waterloo, Canada, was that the powers are still the United States and Canada. "There are promotion programs in schools, universities and there are even scholarships for this specialty and of course a very high population that practices it".

He went on to say that " In Latin America, the countries with the most development are Colombia and Venezuela. In Colombia there is government support that is reflected in the schools. In Venezuela there is talent, but their economic situation makes it unattainable for their athletes to participate in these events, and, in fact, they do not do so since Toronto 2013 ". "In Mexico, for example, we do not have any fields to train on, because many are hired by football leagues," Rincones said. He also added that in development Brazil, Chile, Argentina and Uruguay are located , being Peru, Bolivia and Ecuador, where there are less bases for this sport in South America. In Central America, it leads Mexico ahead of the Dominican Republic and Nicaragua.

Women in this sport

For Vanessa there is no doubt, it is a sport that is very well linked with women. "The female sector has many options to stand out because it is a sport that is based on inclusion and respect. In fact, there are male, female and mixed categories, which is very close to entering the Olympic program. There are movements and activities in which women are protagonists. This year 2018 began the study for a professional league of women, for now there is only semi-professional in the United States, but men. But there is a lot of space for women because they are already managers and coaches. "

Adleny Nieves, of the club Zero Gravity, assures that the joy of the players was what enamored to him of this sport by its disposition to teach beyond the sex, the nationality or the age. In addition, they celebrate each goal or outstanding play, even if it is against the opposing team because it allows you to get excited about the achievements of the other and that little is seen. "We are not only players but also referees."

At the same time, Consuelo Toro, from the Frisbulls Ultimate Club, points out "I fell in love with this sport because of its multiple characteristics, such as being mixed, that is, sex is the least important and skill is the most important thing. It is a sport that teaches you methodology and puts everything in our hands to also serve as arbitrators. The spirit of the game comes first and that teaches us all, apart it is entertaining and novel because it is out of the ordinary ".

A sport without a referee

It is undoubtedly one of the newest aspects that introduced this sport since its birth. "Our philosophy is that we do not need a third party to comply with the rules, because it has to do with a way of acting and of complying with yourself, with the public and with the rival. We rely on the game spirit, which is knowledge, compliance and application of the rules. Fouls, or out, but who makes those decisions are the players themselves, "said the director of JUF.

Corners exposes an important point on the arbitration issue. " There is yes, the Game Advisors, who are observers of the matches and who serve to help a player on a play that occurred in the game and these give their perspective, it is like a help, but the decision will always be the players" , he added.

The formula that engages educators and amateurs

For Smoda.elpais.com the "hook" of this sport lies in the spirit of play. From the Spanish Federation of Flying Disco (FEDV), Nicolás Chauveau, said "much beyond the so-called 'fair play'. In the field those who rule are the players. It's not easy, it requires them to know the rules very well and they have to make sure they respect it. "

The aforementioned Spanish portal adds that after each match, the teams meet to analyze the behavior of both, and thus assess them on a score sheet. There are awards in the tournaments for the team with the best game spirit. All this, promotes that men and women compete at the same level, and without any distinction on or off the field, even with dialogue and fair play as codes in each game.