Would you get in a bathtub with broken glass? That is the artwork of Yann Marussich, who is visiting Colombia for the first time and with whom LatinAmerican Post spoke

In the framework of the 11th edition of the Dance in the City Festival, one of the most important artists of the contemporary art scene in Switzerland arrived in Colombia: Yann Marussich. With it, the unconventional cultural space ARTESTUDIO inaugurates in Bogotá the ARTESTILO Brand Guests Cycle. His artistic works can be visited until Friday, November 16.

There are two performances that the artist will present in the Colombian capital. The first one is called "Blanc" (2015) and it will be carried out as a performative tour in Chapinero, starting at Plaza de Lourdes, following Carrera 13, Calle 60, Parque de los Hippies and ending at ARTESTILO.

The artwork is about the immobile artist dressed in a white suit, inviting pedestrians to respond by drawing or writing on him the answer to the question: How do you want to die? Marussich said in an interview with LatinAmerican Post that the reaction of the participants is interesting. While some say "I don't want to think about death", others tell him that they are going to die because they suffer from cancer.

The second performance is called "Bain Brisé" (2011) which is quite an experience from the beginning to the end. In this, we can see how a living man is in a bathtub under 600 kilograms of glass and can leave safely without any cut on his body.

The artist affirmed that he must have more or less a previous mental preparation of about six hours and that at the time of the performance he cannot think about what he is doing because it would be very painful. He also commented that in this presentation he feels the energy of the people all the time and that many of them cry.

One of his presentations will not take place during his visit to the country, as he does not want to do it again for the time being. This performance is called "Blue Remix" (2007). This is a performance in which we observe the artist locked in a glass cubicle sitting for a long time.

At first not much happens, until with the passage of time Yann begins to cry and sweat, while all his bodily fluids are evident in blue. Although he does not reveal the secret of how he does this, he said that many times his eyes hurt for having made his presentation repeatedly. 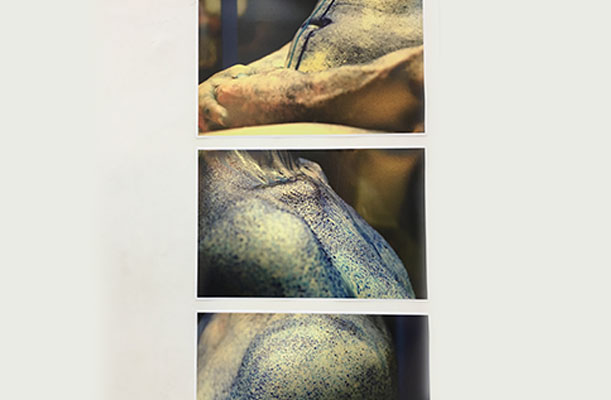 Last Wednesday, a talk was held with the artist, in which he told everything he has done; as well as its message, which is personal as each viewer is the one who develops it. In addition, he shared some of what he has been exploring lately: immerse himself in fresh cement waiting for it to harden and then get out alive.