After three underwhelming years at Old Trafford, it appears Paul Pogba is finally heading towards the exit door. While the club have made noises that they would like to keep him, you would expect the midfielder to engineer a move before the end of the transfer window.

Juventus and PSG have been linked, but the rumours suggesting he is on his way to Real Madrid have become difficult to ignore.

Zinedine Zidane is building a new team at the Bernabeu, and he is a massive fan of his compatriot. While money may be a bit tight after their recent spending spree, you get the feeling that they will conjure up the finances to get this one done if the opportunity presents itself.

While Pogba has flattered to deceive for much of his time in the Premier League, could a move to Los Blancos be the perfect remedy to revive what has become his fledgling stardom? Maybe.

So how would Pogba fit at Real Madrid? Well on the surface, pretty well it seems. Of course, there are long-standing questions about his attitude and application, but on a tactical level, this is a team that should allow him to thrive.

After spending the last three seasons hearing analysts say Pogba was continually played out of position at United, he should finally be allowed to play in a role that suits him at Real Madrid.

While he has shown the flexibility to field various lineups, Zinedine Zidane usually favours a 4-3-3 formation. It worked to perfection early in his first spell in charge, with Cristiano Ronaldo and Gareth Bale cutting in from the wide positions to leave plenty of space for the full backs to operate out wide.

The video below breaks down the formation, as well as Madrid's pattern of play in the Frenchman's first game back at the club earlier this year.

It floundered at times last season, but much of that can be contributed to the personnel he had at his disposal. Eden Hazard will be a major upgrade on the left wing, while Vinícius Júnior missed the closing period of the campaign due to injury.

Assuming everyone is available, you would expect the team to look something like this next season. 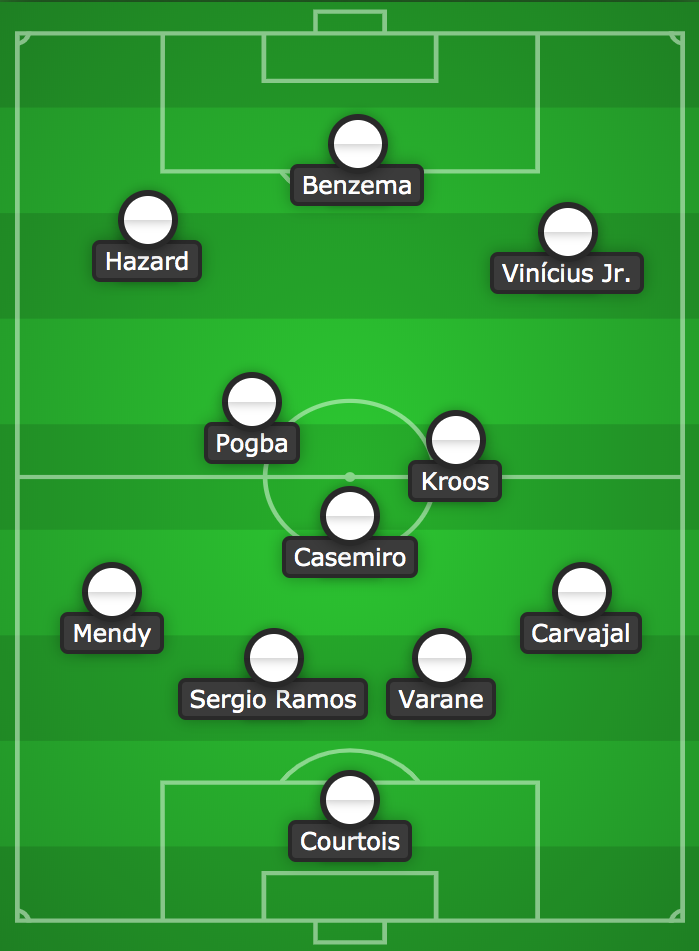 That starting line-up is very flexible. Marcelo will not be easily ousted from the left back spot, although his form last season was dire at times. Navas could also start over Courtois, with the number one jersey still very much up for grabs.

The midfield question is an interesting one. Luka Modrić will turn 34-years old later this year, and he displayed serious signs of decline over the past nine months. He will likely see his playing time cut in the upcoming campaign, and he has also hinted that he would like to leave the Bernabeu.

Against lesser opposition, you could certainly see him start and have Kroos play in the holding role.

Luka Jovic is likely to be brought along slowly, and with Benzema having maybe his best season in a Madrid shirt last year, he should hold onto the striker spot for now.

That leaves the left midfield position open for Pogba, the role he has thrived in for both Juventus and France.

Unlike at United, he will not be asked to start attacks from deep or dictate the pace of play. Instead he will be allowed to pick his moments to sprinkle in a bit of magic, a task that is far more suited to his skillset.

When in possession, Madrid's fullbacks will provide much of the width in the team. Hazard and Vinícius will drift infield to leave them plenty of space to operate, while Benzema will drop slightly deeper to accommodate the inside forwards.

When the ball is on his side of the pitch, Pogba will drift out to offer support to the left back. 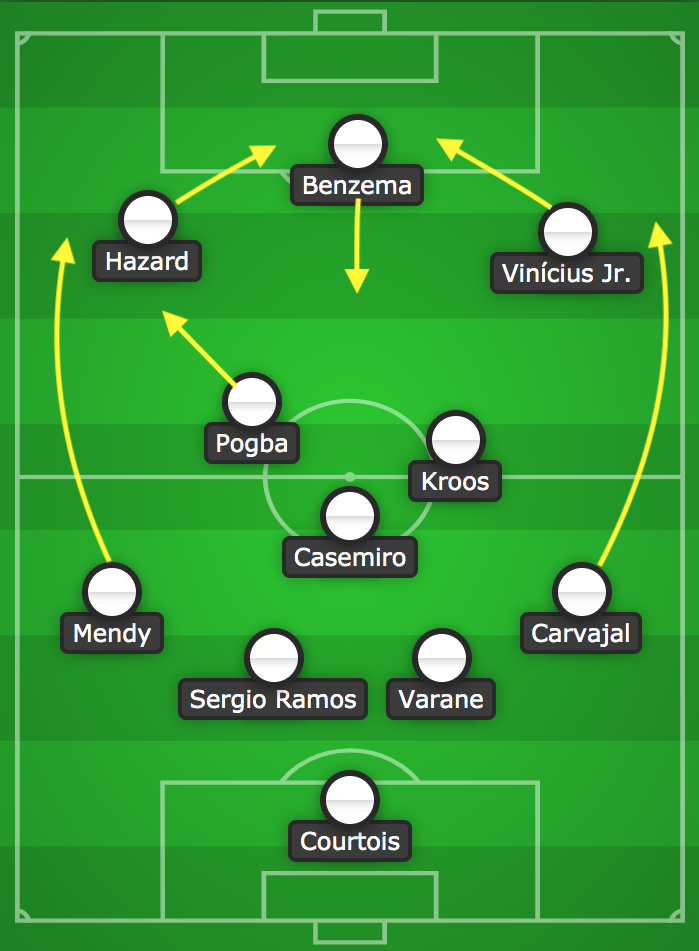 Casemiro will remain to deep to guard against the counter-attack, with the centre back pairing holding a high line.

In periods of sustained possession, the Madrid team will be laid out something like this. 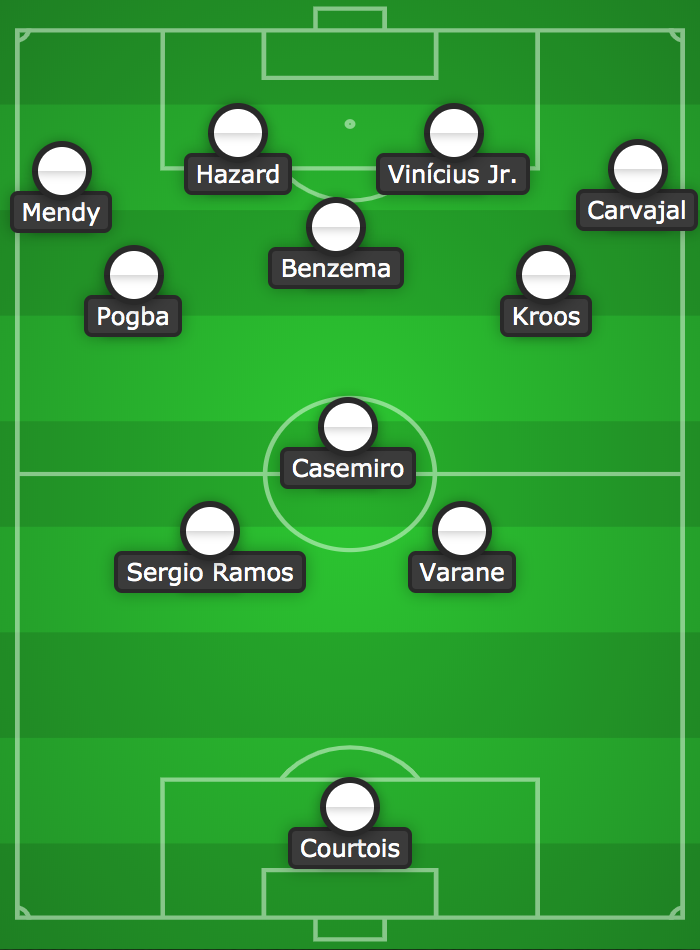 It is in this scenario that Pogba could well thrive in the team.

Despite their poor form last season, Madrid still averaged the third highest possession rate in La Liga. They dominate the ball, especially against the lesser teams in the division.

What is interesting is what they do with this possession. Whereas Barcelona attempt to pass the opposition to death by continually shifting them out of position with short passing, Zidane's teams have a much more direct approach.

Real Madrid averaged 20 crosses per game last season, by far the most of any team in the top six. With the wingers drifting infield, the responsibility falls elsewhere to deliver the ball into the penalty area.

The full backs contributed, but it was the midfielders who did the lion's share of the work. Toni Kroos, who operated mostly in the left sided midfield role that Pogba would occupy, averaged by far the most crosses in the team.

Madrid tend to cross the ball from the corner of the box towards the far post, meaning the midfielder is often the best positioned to do so.

Pogba would thrive in this role. If there is one thing he does well, it's hitting raking passes across the pitch.

Playing in that advanced role, much of Pogba's responsibility on the ball would be to play two types of passes. 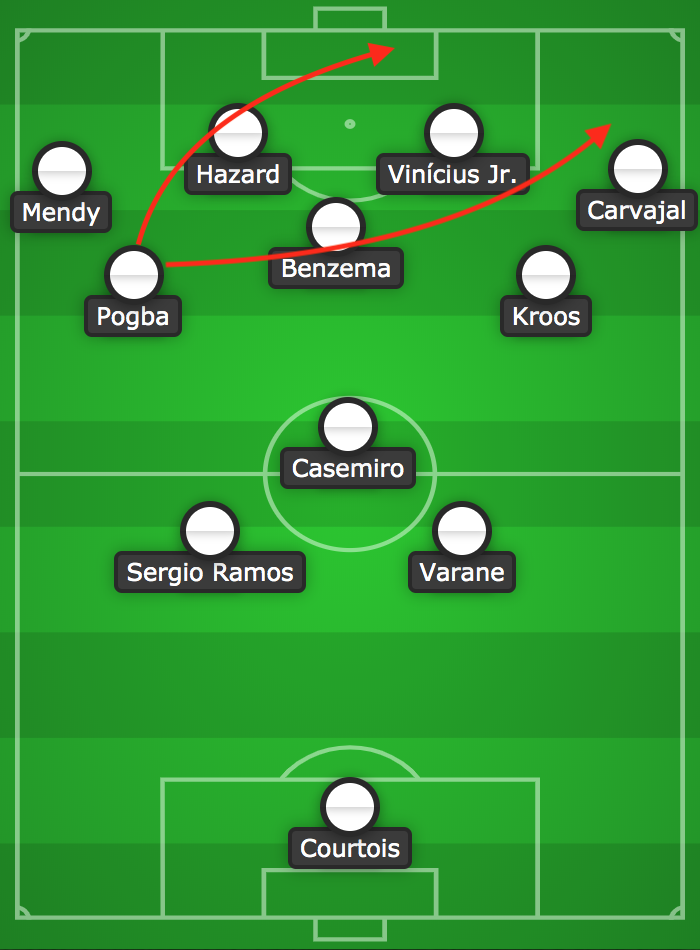 Just as he did in the World Cup final clip above, Pogba will also be asked to be available to play decisive passes and shoot from the edge of the penalty area.

For a player who on average took almost twice as many (three) shots per game than any of his teammates last season, he should have no problem playing in a team that took by far the most long range shots in La Liga in 2018/19.

When the ball is on the right flank, there will be an opportunity for the Frenchman to get into the penalty area and attack the ball. His height and athleticism make him a major threat in the air, and he has shown the ability to capitalise on such scenarios in the past.

Take a look this headed goal against Manchester City as the prime example.

If Pogba does make the move to La Liga, you can expect to see him make decisive runs such as this one on a regular basis. You should see his goal tally from open play to increase as a result.

Of course, all of this is conjecture. Pogba may not move to Real Madrid. Even if he does, there is no guarantee that he will produce to a level deemed acceptable by the notoriously fickle Bernabeu crowd.

Looking at it from a tactical point of view, however, this Madrid team seems perfectly set up to allow Pogba to thrive. Maybe we will finally see the star player that was supposed to have arrived in Manchester in 2016.