n this June 28, 2019, photo, Dianelys Alfonso, singer whose voice won her the label "Goddess of Cuba" sits during an interview with The Associated Press in Havana, Cuba. (AP Photo/Ismael Francisco)

—Dianelys Alfonso has a bold presence— brightly colored tattoos, spandex bodysuits, Technicolor hair — and a clarion voice that won her the label “Goddess of Cuba” for her turns on songs ranging from ballads to reggaeton.

Now she’s also the center of a new phenomenon in Cuba after publicly accusing another renowned musician, flutist and bandleader José Luis Cortés, of repeatedly assaulting and raping her during their yearslong relationship while she was a vocalist for NG La Banda, one of the best-known Cuban bands of the last three decades.

Since Alfonso’s accusations against Cortés on an internet video program last month, many Cubans have declared their support for her online, calling her the pioneer of the #MeToo movement in a country where open discussion of violence against women is rare.

Cortés has not publicly responded to the allegations or messages seeking comment left by The Associated Press on his band’s social media accounts or with his promoters.

Within hours of speaking to video host Alex Otaola and alleging that she had been abused by Cortés, hundreds of Cubans on the island and in its diaspora in the United States, Latin America, and Europe began posting messages of support for Alfonso with the hashtags #IBelieveYouGoddess, #MeTooInCuba and #YouAreNotAlone. 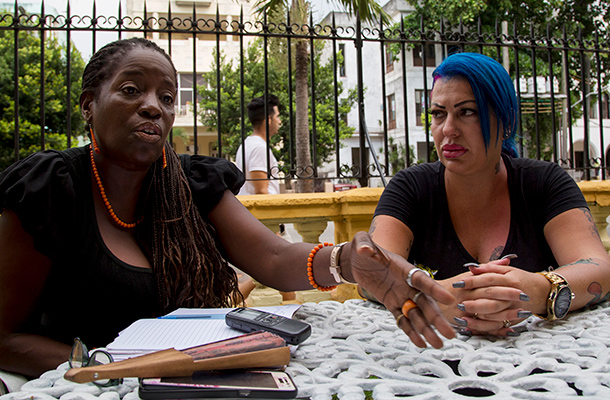 In this June 28, 2019, photo, Dianelys Alfonso, left, singer stands with her lawyer Deyni Terry, for a photo during an interview with The Associated Press in Havana, Cuba. Alfonso publicly denounced another renowned musician, flutist, and bandleader José Luis Cortés, accusing him of repeatedly hitting and raping her during her time as vocalist for NG La Banda. Terry said she and her client are investigating whether they can bring charges of abuse and sexual assault against Cortés many years after the alleged crimes took place. (AP Photo/Ismael Francisco)

Alfonso also has received reams of abusive messages calling her a liar and accusing her of besmirching Cortés’ reputation to win greater renown.

“I look at everything happening online and I’m stunned,” the 38-year-old singer told The Associated Press. “I can’t understand what’s happening online. I’m just trying to keep getting professional psychological help to deal with everything that’s come at me for having told the truth.”

Online activism of any kind is relatively new to Cuba, which only began permitting mobile internet this year. Until recently, open discussion of domestic abuse also has been rare in a communist society where the government portrays itself as able to take care of every social problem and where there are only a handful of non-governmental women’s rights groups.

The government last year organized a publicity campaign to raise consciousness of domestic violence, with posters and announcements in official media under the slogans “You Are More” and “Evolve,” though that appeared to focus more on physical than sexual abuse.

Some 500 Cuban artists and intellectuals have signed an open letter of support for Alfonso that condemns violence against women on a Facebook page titled, “I Believe You.”

Actress and producer Violeta Rodríguez, daughter of Cuban singer Silvio Rodríguez, wrote on her Facebook page last month that she had been abused by a “famous and powerful” Cuban man but had remained silent for years. The post was later deleted, without explanation.

Alfonso was the lead singer for NG La Banda from 2003 to 2009 and was involved romantically with Cortés for much of that time. She said Cortés repeatedly hit her, raped her and verbally abused her, in private and in public, during their relationship and after it ended. She said the abuse finally stopped after she left the group in the middle of an Italian tour in 2009 and did not return to Cuba until 2014. 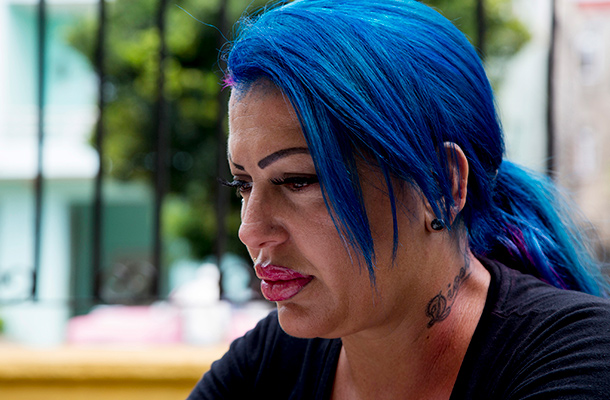 In this June 28, 2019, photo, Dianelys Alfonso, singer whose voice won her the label "Goddess of Cuba" sits during an interview with The Associated Press in Havana, Cuba. She became the center of a new phenomenon in Cuba when she publicly denounced another renowned musician, flutist, and bandleader José Luis Cortés, accusing him of repeatedly hitting and raping her during her time as vocalist for NG La Banda, one of the best-known Cuban bands of the last three decades. (AP Photo/Ismael Francisco)

Alfonso’s lawyer, Deyni Terry, said Cortés sent the singer a threatening text message after she went public with the accusations. Alfonso reported the threat to police, Terry said, adding that she and her client were investigating whether they can bring charges of abuse and sexual assault against Cortés so many years after the alleged crimes took place.

“Many victims wait years to say what happened and that complicates judicial action, especially in Cuba where many laws are outdated,” the lawyer said.

Cuban authorities did not immediately respond to a request for comment on the case.

Terry said the online reaction to Alfonso’s accusations appeared to be a sign of changing attitudes on the island.

“People are being more daring, speaking out, talking about taboo topics,” she said. “They’re taking risks and have more freedom to speak out.”

A national poll conducted in 2016 and published this year showed that some 27% of 10,698 women who responded to a questionnaire reported being mistreated or abused by a man over the past 12 months but less than 4% sought help.

The availability of the internet in Cuba has allowed activists for various causes — from animal rights to LGBTQ freedoms — to better organize and advocate over the last seven months. The same may now be happening for women’s rights, observers said.

“The internet allows us to have a greater diversity of debates and struggles and bring many problems to light,” said Francisco Rodríguez, a gay-rights advocate and blogger.