Environment and women seem to be two unrelated topics. However, the WeDo association realized that both are related and can be addressed simultaneously. For this reason, WeDo in collaboration with the Finnish Ministry of Foreign Affairs, the Global Gender and Climate Alliance (GGCA) and the Swiss Ministry of Foreign Affairs launched the app The Gender Climate Tracker.

In the app it is highlighted that the social roles of men and women as well as their experiences, needs, and knowledge affect climate change in different ways. Therefore, climate change highlights different forms of gender inequality.

Although both men and women are needed to reach solutions to combat this environmental problem, "the integration of women's rights and gender equality within migration and adaptation of climate change is not only essential, but also maximizes the effectiveness of interventions, programs and resources", explains the platform. For this reason, addressing gender inequality and environmental issues could guarantee the resolution of both in a more effective  way. 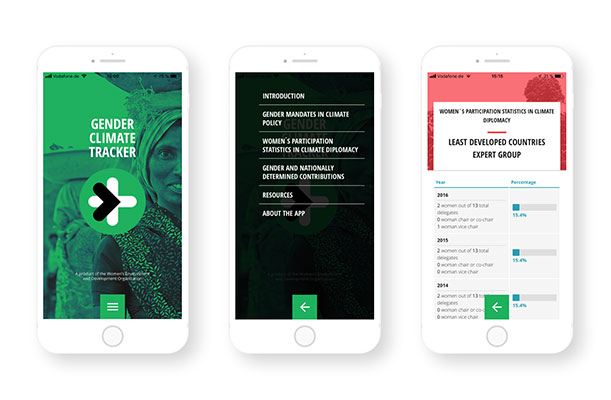 What is it and how does the app work?

According to the app's page, the platform "provides experts, decision-makers, negotiators, and advocates of access to the latest information on research, decisions and actions related to gender and climate change. By reviewing, compiling, and publishing this information, the application empowers civil society, governments, and citizens to hold their governments accountable for their gender commitments".

The app is in English and available for download on IOS and Android. The app also has a desktop version for computers.

When entering, the user finds 6 sections:

Each of them informs the user about the environment, gender, and their relationship.

The Gender Climate Tracker gathers information about the participation of women in relation to climate change. For example, application statistics show that female participation in the last 8 years has increased, both participation in general and high-level decision-making. However, although there have been advances, women are still underrepresented in national delegations that fight against climate change.

The app besides compiling data and statistics shows the participation of women by country. In Latin America, the situation is like this:

WeDo is the acronyms for Women's Environment & Development Organizations. This global organization advocates for women and promotes a just worldview that protects human rights, gender equality, and the integrity of the environment. Its mission is to contribute to guarantee the rights of women in social, economic and environmental matters.