After the release of his debut album with his band Warm Tricks, Battle will be presented on Friday, May 4 in Bogotá, the city that has seen him grow musically.

Do you know anything about Essex, England? This county located east of the island has brought to the world some of the most notorious musicians and bands of the contemporary world. Groupings such as Blur, Depeche Mode, Humble Pie and The Prodigy are some that managed to reach world fame and travel the world filling large-scale sites. But today we do not come to talk about the old glories, today we come to talk about an Englishman who fell in love with a Colombian woman in London while they studied both there and convinced him to go to Bogotá. He did not need to know about an endless number of animals or exotic fruits: love for his partner was enough. Today we are going to talk about Matthew Battle.

They arrived in the Colombian capital in 2014. Matt, as he prefers to be called, started translating into English and editing texts in his native language as a freelancer to pay the rent. Soon after he managed to get a job as a teacher in the EAN, he taught English, English culture, literature and business in English.

It was until the end of 2015 that he decided to compose, record and produce music at home as a soloist. He released five LPs in total, and managed to form a band to perform in several Bogotá sites. Last year he decided to move away from the Matthew Battle project - not to confuse with Matt Battle on the streaming platforms - to found Warm Tricks. In August of 2018, he released the first single, entitled 'Aeaea to Ogygia; or Summer's Gone '. Thus, on May 1, he released his debut album, Owl Flies Home, concept album. We talked to him to explain a little about his debut album and his musical tastes. 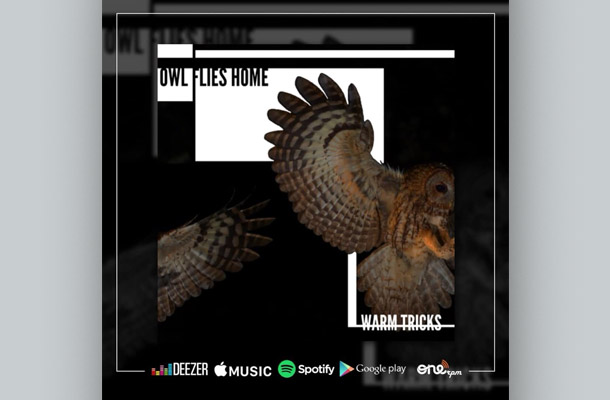 Matthew Battle: An album is conceptual, I think when there is a theme or a narrative that ties the whole album together in some way. This could be musical themes (recurring musical motifs, for example) or lyrical ones. In the case of Owl Flies Home both these methods are used.

MB: I took the name from James Joyce’s Finnegans Wake. I came across this passage: “All me life I have been lived among them but now they are becoming loathed to me. And I am loathing their little warm tricks”. Joyce is one of my all-time favorite writers so it seemed appropriate. Plus, Owl Flies Home is based on the Odyssey, and Joyce’s Ulysses is a modernist retelling of the Odyssey, so it all kind of made sense to me. I read the passage as the narrator spurning other humans, their “warm tricks” is his description of what he sees as the falseness of human warmth. The narrator sees himself as an outsider amongst the rest of humanity, which again kind of ties up with my project, which could be described as “Outsider Music”; music generally made by people in their bedrooms doing it by themselves (DIY). So a warm trick is that fakeness at the heart of a society that many of us mistrust, a mistrust of the masses I guess.

LP: In The dream pt 1, who speaks on the radio?

MB: The Dream Pt 1 is a precursor to the album’s narrative. It is a dream sequence in which the narrator is a 7-year-old boy sitting in bed reading books. Basically, the voice he hears on the radio is a premonition of his true love—his Penelope in terms of the Odyssey—the woman whom in the album’s narrative he will eventually find in Bogota, Colombia. She’s calling him across the radio. Basically in the album sequence you have “The Dream Pt 1” and “Call of Ithaca (The Dream Pt. 2)” in which the narrator preconceives his journey to Bogota, but then he wakes up and is still in his hometown (“Troy”) before he actually does take off and make the journey as Owl from “Aeaea Island (Circe)” onwards. Whether he really does become an owl and make the journey in some kind of fictional reality or it all takes place in a continuous dream is up to the interpretation of the listener.

LP: Is indie the same as punk in terms of DIY?

MB: I’m not sure about the term Indie, I don’t really like it. It originally comes from the rise of independent labels like Rough Trade in the 80s. Therefore, it’s not a genre, it doesn’t describe anything in a musical sense but rather just describes the type of label a band is on. Nowadays any band that plays some jangly guitars and is a bit “quirky” in relation to the pop world is labeled as Indie, but the only thing most of these bands have in common is that they play guitars, and anyway most of them aren’t even on independent labels any more.

Punk and DIY, on the other hand, are in a sense one and the same. For me Punk isn’t this clichéd image of leather jackets, Mohawks and safety pins but rather the spirit of DIY; to make use of whatever you’ve got, both in terms of material objects and musical ability. Punk to me is freedom from the established rules of music. Punk says you don’t have to be a virtuoso on your instrument, all you need is to learn three chords and then you can form a band and write songs. To me, that’s very liberating and for that reason, I would class myself as a disciple of the Punk ethic. Music for me isn’t about virtuosity, it’s about expression and creativity.

LP: Many English people who live or have lived here, like Quantic or Richard Blair of Sidestepper, have mixed their native influences with both Colombian and Latin American music, like cumbia or salsa. Have you ever thought about fusing your style with Latin rhythms?

MB: I have thought about making music that is more danceable for live settings. I see that people here, generally speaking, come at music from a different angle than people from my culture do. In the UK we have a long history of cerebral music, music that isn’t meant to be danced to but rather listened to and contemplated and at best moshed to. Obviously there are exceptions, but in Colombian culture generally speaking music is there to be danced to, it’s there for people to party to. So yeah in that sense I have thought about maybe if I put a beat that is more danceable within some of my songs perhaps it would be more accessible for some Colombian audiences. On the other hand, I kind of find it a bit cringy when people try to mix genres that are so blatantly different. I think in order to do that successfully you’d need to have a bit of each of those musical cultures within your own musical DNA.

I also think that these kind of mashups are more successful in dance and electronic music; like the examples you gave in your question. Having said that, I’m not averse to starting another musical project that is perhaps more tropical but I think it would be a distinct project to Warm Tricks. In fact, I have a Colombian friend who grew up in London who invited me to play guitar in a Punk-Salsa band that he’s currently dreaming up. I think as far as I’d go with Warm Tricks however would be, as I said, to introduce some danceable beats and/or percussion to the songs, which after all has already been explored by many Post-Punk bands.

LP: What Colombian music do you enjoy the most? Latin American

MB: I like a lot of Colombian and Latin American music. I find the old Colombian Vallenato artists very interesting, people like Calixto Ochoa, Alejo Duran, and Rafael Escalona. I’ve always liked finding old blues records of largely unknown artists recorded in a very basic way back in the early 20th century and I see a parallel between them and these old Vallenato artists in the sense that they are folkloric artists at once transmitting and disseminating culture in a very traditional, organic way.

I’m also a big fan of Hector Lavoe and Willie Colon. I’ve talked about these artists before in other interviews, and apart from Colon being an amazing composer and Lavoe an amazing singer and lyricist, what I find particularly interesting about them is the light and dark in their work. What I mean by that is the darkness and poeticism of Lavoe’s lyrics and the lightness of Colon’s music. Going back to what I spoke about in my previous answer, they successfully mix those two aspects of music I described; the cerebral tradition that you find more explicitly in British music where meaning is poured over in an intellectual way and the more physical danceable aspect that you find more commonly in Latin American music. In other words, their music can be danced to but it also has this dark, intellectual side to it which means that one can also just sit and listen to it. I find that very intriguing and I believe it is something that is very hard to do well.

LP: Taking advantage of the fact that Elton John's biopic opens soon, which musician (not band) would you do a biopic?

MB: I would like it on R. Stevie Moore, who is called the godfather of DIY music. It seems to me that he has been a little ignored throughout his life despite composing incredible music. I guess I see it as a kindred spirit. 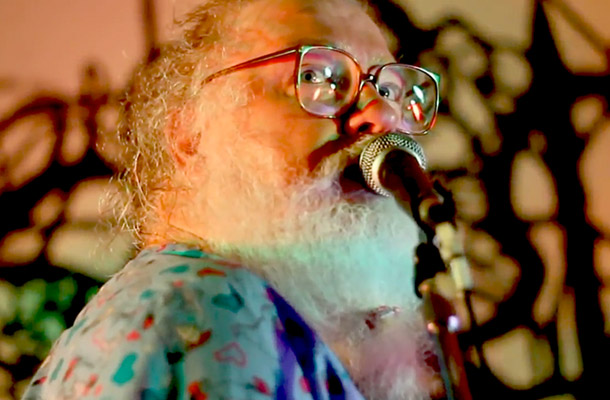 LP: Several experts agree that the era of the CD is over. Do you agree? If yes, what plans do you have to market your music in a physical format?

MB: Yes, well the CD is dead in my own personal experience since I never listen to CDs anymore, despite having quite a large collection still at my parents’ house. There are not many places in which you can listen to them anymore, most cars don’t have CD players, most computers don’t even have them now. Personally, I’ve always liked vinyl, ever since I was a child. My first album was a Michael Jackson album which I bought on vinyl and played on my parent’s record player. Then after that, I bought myself an old second-hand box record player and started playing all my parents’ Beatles and Led Zeppelin records on it and then started buying my own records. I still have a record player in my flat in Bogota as well as my record collection.

So yeah for me the CD has never been that important a format. I’d like to print my albums on vinyl but getting vinyl printed in Colombia is impossible and so it becomes expensive and a difficult process of importation. For now, we will be printing Bandcamp download codes to sell at our album launch. But for me a physical object is important, which is why I particularly like vinyl since it’s larger format gives you the sense that it’s a piece of art, something to handle, to study, and so on.

If you live in Bogotá and you are interested in attending the live release of the album, here we leave the flyer with all the information for you to go. 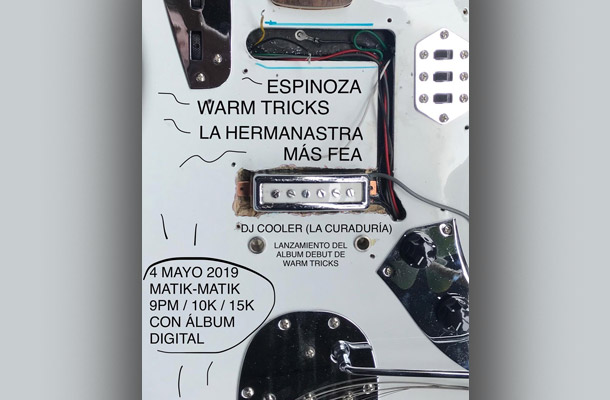 Here more of our favorites about Meghan and Harry.

What does this mean for the royal family? Here we answer all your questions.

I am thinking of arriving at Amber cafe, a nice place that serves as a cultural office.