For many, it looks like Pokemon. For the scientific community, this animal is fascinating for being able to emit its own light

The animal world is undoubtedly full of amazing species that never cease to amaze the human being. This time the turn is for a sea slug, known as Costasiella kuroshimae. This animal is amazing and here we tell you everything you need to know about the 'solar sheep'.

What kind is it?

The Costasiella kuroshimae is a shell-less mollusk of only 5mm in length. Instead of having a shell, it looks like it's covered in foliage and green leaves that end in bright colors like purple and blue. 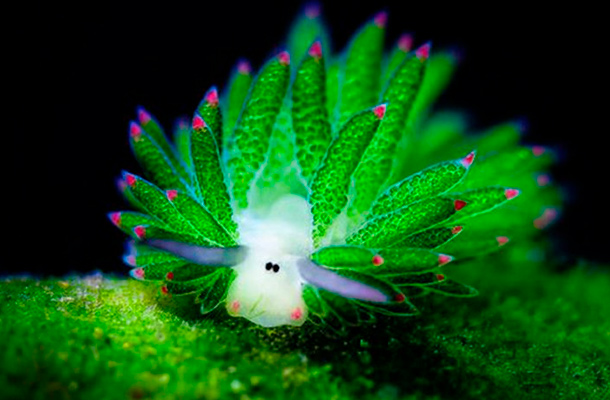 Where do you live?

The small mollusk lives in Indonesia, Japan, and the Philippines.

Why is it so fascinating?

In addition to its tender and caricatured appearance, which for many resembles a Pokemon or a being taken from a children's book, the small mollusk is capable of emitting its own light. According to Very Interesting, this 'leaf sheep' feeds on algae, which allows it to have fluorescence.

This process is called Cleptoplasty and consists of the algae providing chloroplasts to the slug. Dr. Bill Rudman, an invertebrate zoologist at the Museum of Australia, in statements collected by Vista al Mar, explains that "marine slugs feed as herbivores sucking. Most simply suck and digest the cellular content of the algae they feed on".

Read also: A 2gm mammal and 3 other fun facts

The scientist adds that "sacoglossan sea slugs have evolved the branches of his intestine that protrude from the wall of the body. This allows them to store the chloroplasts still in operation (of the algae) in this digestive gland, where they are exposed to sunlight through the transparent layer that covers the body of the sea slug. "

This portal ensures that in addition to being able to emit light, the Costasiella kuroshimae has another curiosity and for this reason has nicknamed it the "sheep with solar energy".

The small slug can make photosynthesis, a process usually done only by plants. The process allows you to store energy in your "leaves" and survive on that energy.

Beyond its appearance and the processes that this slug is capable of performing, it is striking that it uses the sun to feed and survive. Its existence is an example of the implementation of solar energy as an alternative to the use of fossil fuels.

The implementation of renewable energy is especially important and necessary at this time considering that climate change is affecting the welfare and balance of the planet. A transition to renewable and sustainable energies will allow the reduction of greenhouse gases and thus mitigate the consequences of warming; for example, the melting of glaciers, the reduction of extreme climatic events such as the El Niño Phenomenon, the massive disappearance of flora and fauna species, among others.

For this, as a citizen, remember that you can support public and private initiatives that promote the implementation of these energies. You can also check how viable it is to install this type of device in your home and office.