Three Latin transgender artists— two from Argentina and one from Uruguay— agreed that trans visibility and access to creative culture have improved tremendously in their home countries over the past 20 years.

Susy Shock, Sofia Saunier and Calenna Garba each combine artistic talent and passion for activism to break cultural barriers and thrive in the wider artistic community.

Argentina and Uruguay are home to some of the most progressive gender laws in the world. In 2012, Argentina passed the Gender Identity Law, which guarantees the right to change one’s gender on official documents without a diagnosis, surgical procedures or hormone therapy. The law also establishes the right to such treatments and has been cited by the World Health Organization as best-practice.

In October 2018, Uruguay passed a law that reserves a percentage of government jobs for transgender people and establishes a reparation pension for transgender people who were persecuted during Uruguay’s dictatorship, which ended in 1985. The law also guarantees free access to related healthcare, including gender operations and hormone treatments.

Legal equality doesn’t necessarily equate to social equality, Andrés Scagliola, coordinator for Montevideo's Secretariat of Diversity, pointed out. Violence, barriers to healthcare and low job opportunities all contribute to low life expectancies for trans people— the Inter-American Commission on Human Rights puts the average around 30-35 years in the Americas.

Access to art, both as a participant and as a spectator, is a difficulty for transgender people, who are often sidelined by mainstream culture. “They also can’t access different jobs associated with the artistic phenomenon, like stage lighting, makeup artists, and more,” Scagliola said.

To help combat these issues, Scagliola has organized Trans Art Week for the last three years, a celebration of gender diversity and free public exposition for trans artists’ work.

“In general, and here in Uruguay, trans people more often than not are associated with sex work”, Scagliola said. The festival is an opportunity for trans artists to be seen in a different social and cultural space— “artists, producers of culture, people that contribute to the culture of Uruguay”.

Scagliola cited Susy Shock as one of the artists who inspired Trans Art Week. Shock describes herself as a trans “sudaca” artist. She said by reclaiming the offensive term, she aims to create political discourse and feel proud. Her artistic resume is long— Shock does theater, music, poetry, singing and political artwork.

“In Argentina, during the last ten years or so, [trans artists] have started to gain visibility as a result of many years of activism by the whole LGBT community, but the trans/transvestite community in particular,” Shock said.

Shock said she regards the Argentine and Uruguayan gender laws as a crucial success of activism.

“We are starting to speak with our own voice, led by Lohana Berkins, Nadia Echazú, Marlene Wayar, and Diana Sacayan,” Shock said. “We have achieved laws implemented in other parts of the world. Above all, a political presence, a political voice of our own.”

Uruguayan Sofia Saunier describes herself as a multi-artist. She does photography, drawings and more, yet is perhaps best known for her documentary series, Trans-Ur, which follows the lives of more than 50 transgender people in Uruguay. Saunier has participated in all three editions of Trans Art Week.

For last year’s edition, through the Florencio Sánchez Cultural Center, Saunier participated in the Trans Motorcade. It’s just what it sounds like— Saunier and two transgender comrades traversed through Uruguay on motorcycles: visiting cities, meeting people and recording videos of their experiences, with the hope of increasing trans visibility and acceptance.

“People take pictures of us and speak with us,” Saunier said. “Because it’s something very striking, three trans people riding on motorcycles.”

The new Uruguay law has made all the difference, according to Saunier.

“Now everything is changing for the better, thanks to the law and thanks to the people that are accepting us, not rejecting us like before,” she said. “Things are improving slowly, but really are improving a lot compared with other countries in the world.”

Transgender people in other Latin American countries like Ecuador and Peru aren’t as lucky, Saunier said. “They are very rejected.” 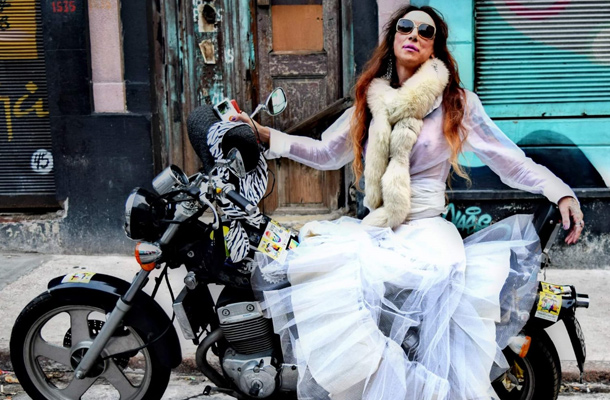 Saunier in the 2018 Trans Motorcade (Photo by Hema Toma)

Garba said the music she creates portrays the hills and valleys of her transition experience.

“There is still a lot to do, I have no doubt that there are still inequities, inequalities of opportunities in the workplace— it is absolutely true”, Garba wrote in an interview. “But increasingly, companies implement good work practices and train employees to better understand human diversity. That is why constant training and visibility of the problem is essential”. Garba's goal is to keep building bridges through music, and one day for her compositions to be featured in a movie.

“What started as affirmative action for visibility has been converted into an international art festival in Montevideo”, Scagliola said.

Trans art exposure and visibility are especially valuable for other trans people who never thought they could be artists, Scagliola said. 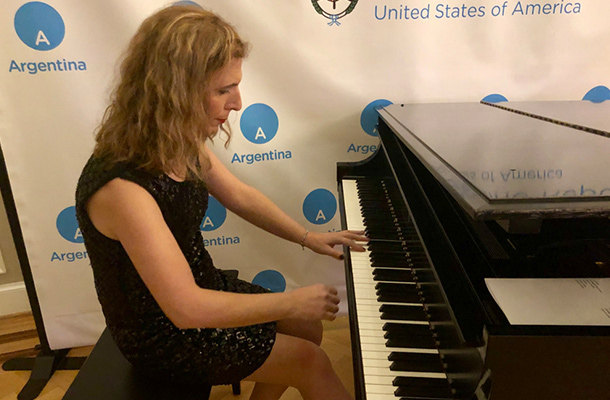 Garba performs at the Argentine Embassy in Washington, D.C. in April 2019 (Photo by Claire Savage)

“Lots of times, trans people don't connect with culture because they can't imagine being actresses or getting photography positions,” Scagliola said.

“They can see that other trans artists exist,” he continued. “This is really important so other trans people can pursue their own artistic vocations.”

*Interviews have been translated from Spanish