Colombian rock and metal lovers are fortunate to have the biggest Latin American music festival in their country and the third largest in the world. Rock al Parque is a festival organized by the Bogota City Hall, specifically by the District Department of Culture, Recreation and Sports, and has international artists of different genres of music around rock, such as metal, punk, ska and even reggae.

The free component of this festival has made it a moment in which you can prioritize "the enjoyment of public space in conditions of equality. It is a clear sign of access to culture and community building through the meeting," said the secretary of culture, María Claudia López. For this reason, the consumption or sale of alcoholic beverages or cigarettes is not allowed, the hours do not exceed 10 o'clock at night and the security to enter the place seeks to be impeccable, in order to promote that culture environment.

In the 24 years that the festival has so far, the organizers have been responsible for throwing the house out the window and get the assistance of up to 400,000 people in one of its editions, and this 25th edition will certainly not be the exception. For this special issue, because a quarter of a century rocking in the Colombian capital must be celebrated, the Secretariat points to shows of international stature and support for national and local talent, and also have talks, shows for children and a show closure never before seen in the city.

Read also: MTV Miaw: the essence of a generation 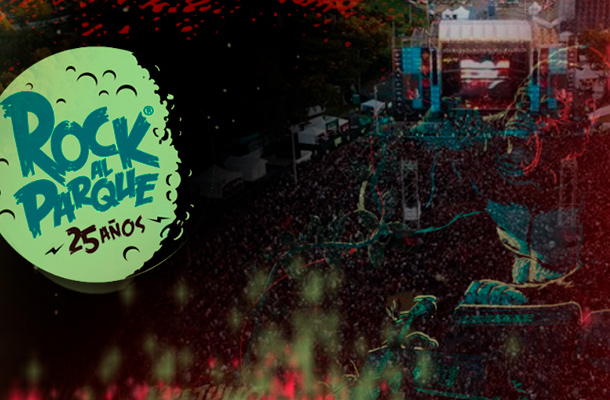 The musical quota has artists from Latin America and other parts of the world, which are headed by the Argentine Fito Páez and the Colombian Juanes. That's right, in its 25 years, Rock to the Park had to arrive with heavy weights and it did it also of the hand of others like Babasónicos, Los Amigos Invisibles, Pedro Aznar, Shoot The Radio (duo with Zeta Bosio, former member of Soda Stereo), among others.

For purist rockers this edition may be giving pleasure to people who may not be lovers of heavier rock, or metal, but the truth is that the level of artists is to blow the stage. In addition, there will be good music for any taste, that's why it's 3 days, 3 stages and more than 50 artists.

The event also seeks to encourage the local and national, for which it will have the participation of 32 Bogota bands and 7 shows by Colombian artists with a broad musical career. Odio a Botero, Pornomotora, Pedrina, Under Threat, Doctor Krápula, The Klaxon and Severa Matacera will be the 7 shows that will show that this country has a great rock career as they range from classic rock to death metal.

In addition to music will also have an "academic" component, where there will be talks that will go from June 28 to July 5, where some of the artists will participate. In them, it seeks to expand on music and its impact on different spheres of society, whether culture, the world of entertainment, literature or even politics. There will also be workshops, and everything will be free. This will be done within the framework of the celebration that the secretariat has planned, in which there will be all kinds of activities with reference to rock throughout the year.

Another show that will steal the attention of the festival, without being exclusively music, will be the 31-minute show. This is a Chilean show with puppets that was on television screens a few years ago and became known throughout Latin America. It told the story of a newscast in which peculiar things happened and they sang songs without meaning. Despite being for children, surely many young people who grew up in the 2000 watching Nickelodeon will want to be part of the event.

Finally, the closing show will probably be an unprecedented performance in the Colombian music scene. Idartes has joined with the Bogotá Philharmonic Orchestra to offer a show that, according to the festival's announcement, "reflects the DNA and the trajectory of a festival that has made history in Bogotá and the world." In this tribute, the musicians will perform some rock classics, accompanied by their interpreters, among them Rubén Albarrán from Café Tacvba, Draco Rosa, Los Amigos Invisibles, Aterciopelados and others.

Many women artists were in the spotlight and took home numerous awards. The Woman Post brings you all the details.

Argentina's music industry seems to be at the forefront of urban music. What is happening?

After three years, crowded festivals are finally returning. The first Coachella weekend was a success, and artists like Harry Styles proved that live music is more alive than ever.