Coffee plants are seen in in Florencia, Colombia. Reuters

Colombia's isolated south could be crucial to the country's push to expand coffee production by nearly 30 percent despite low global prices, its growers federation says, as farmers seek to ramp up productivity amid security improvements.

Output in Colombia, the world's top grower of washed arabica, has hovered around 14 million 60-kg bags for four years as farmers battled extreme weather and low international prices, but the federation and the government have kept a medium-term 18 million bag goal.

To reach the target, the federation is preaching a gospel of productivity: touting tree renovation - which helped boost yields 30 percent in the last decade - and fertilization as a way to raise incomes without more land.

Additional coffee from Colombia, a country known for producing high-quality and sought-after beans, would find a home as global demand continues to grow, traders say.

But it remains to be seen if the target is achievable any time soon, as growers grapple with climate change and futures prices so dire - having hit 13.5-year lows last month - that Colombia has floated the idea of untethering from the benchmark New York futures.

Little-known patches of coffee in the south could be key to reaching the goal, the federation says. Production in the isolated region has long been hampered by Colombia's internal conflict and transportation difficulties.

Farmers in provinces like Meta, Putumayo and Caqueta have grown coffee for decades but many abandoned the crop - sometimes under pressure from armed groups - for more-lucrative coca, the raw ingredient in cocaine.

Though armed groups generally allowed federation advisors to visit farms, there were no-go areas where growers did not get training or help for years.

That changed as security improvements took hold and the Revolutionary Armed Forces of Colombia (FARC) rebels demobilized under a 2016 peace accord.

Importers are already looking to former conflict areas like Caqueta for increased output.

"A lot of new growth that could come from Colombia is in the areas that have been cut off, in former FARC areas," said Jacob Elster, chief executive of Crop to Cup Coffee Importers.

"It's not unreasonable that with better agricultural practices and planting varietals with higher yields, you could almost get" to the target, Elster said.

The federation now has five advisors in Caqueta and hopes that providing farmers with expertise, seeds and other supplies will help them boost productivity.

Romulo Lozano, whose farm is a muddy 10-minute walk up a dirt path near Florencia, Caqueta's capital, hopes new techniques can increase his harvest.

Breaking up packed dirt with his fingers, federation advisor John James Gomez freed the roots of a tree seedling and held the small plant up for Lozano's examination.

"See how the roots are tangled? That means it should have already been replanted," Gomez said, as the two men stood on a forested hillside.

Some farms remain so rural it takes advisors more than a day to reach them, making transporting supplies like fertilizer prohibitively expensive.

Lozano, a 46-year-old former mechanic, returned to work the family farm after his father fell ill. He wants to replant hundreds of trees in a fallow area where leaf rust - a fungus that damages flowering - forced him to uproot coffee plants a few years ago.

He thinks replanting would double or even triple production from 250 pounds of beans per year.

"We've always had crops but without all the techniques that the federation teaches," said Lozano. "We're waiting to see the results." 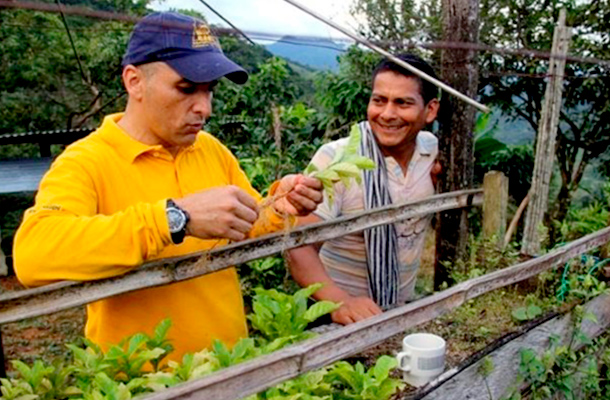 John James Gómez, advisor to the National Federation of Coffee Growers, talks to coffee grower Rómulo Lozano on a farm near the city of Florence. Reuters

Global coffee retail volumes are set to grow by 8.5% between 2019 and 2023, according to Euromonitor International, a market research provider.

"There's a need for coffee to be produced to feed the increasing demand," said Rodrigo Costa, director of trading at COMEXIM USA. "An increase in productivity would lower the cost of production."

Getting farmers to replace at least 10 percent of their trees annually is vital, said Carlos Mario Charry, who heads the federation's Caqueta office. So is planting disease-resistant trees.

The federation replanted 82,000 hectares (200,000 acres) last year. The government and national coffee fund have pledged more than $15 million in renovation aid for farmers.

The efforts to make output gains through productivity and not an expansion of crop area get high marks from environmentalists.

Encouraging farmers to replace trees can safeguard rainforest even as demand grows over the coming decades, Conservation International's Bambi Semroc said.  But while farmers welcome the federation's help, many remain focused on surviving low prices. Obanefer Gonzalez, 57, who has 10,000 trees on a plot near Florencia, wants help offsetting the high fertilizer costs.

"The dream is just to maintain our crops."