The world economy is showing some manifestations of problems that can lead to a global crisis.

The world economy is showing some manifestations of problems that can lead to a global crisis. The PMI index of the manufacturing sector, which measures monthly the performance of the industries, shows an important fall in the main powers of the world, including the US but especially in the eurozone. The magnitude of the crypto is an alert of what could be a global economic recession for next year.

The economy of the globe has been showing some symptoms of malaise in 2019. Economic growth in the main economies of the planet has been declining and with the exception of some of the so-called emerging economies who continue to maintain higher levels - although slowed - of growth.

The highest growth rates predicted to close this year and next are for China and India with figures between 6% and 7%. Then with approximately one-third of the expected growth for these Asian giants is the US with 2.4% and 2% for 2019 and 2020 respectively. On the other hand, the member countries of the European Union will grow at a rate of less than 1.2% both this year and next. Brazil and Russia will grow between about 1% and 2 %, while Japan will record the lowest growth of all with just 0.5% in both years.

What is happening in the industry?

Although a growth close to the world average is estimated, the first economy on the planet registers an ongoing slowdown. The Purchasing Management Index (PMI ) of the Institute of Supply Management (ISM) evidences a clear negative trend for both the manufacturing sector and for the services sector. The manufacturing PMI was 58 in July 2018 while in July this year it was 51.2. On the other hand, the PMI services fell from 56 to 53.7 in the same period. 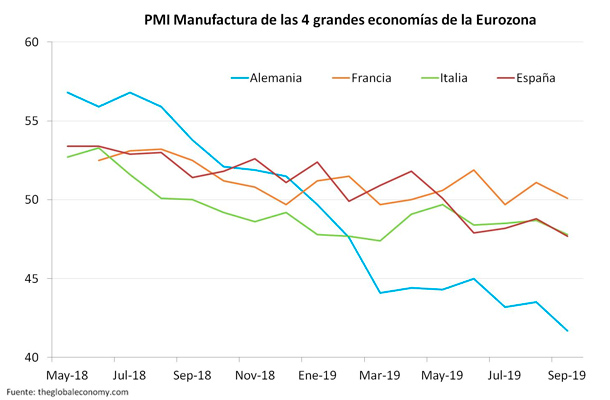 Japan and the European Union also show a behavior similar to the US that reinforces its modest and lower economic growth. The Japanese economy went from a manufacturing PMI of 52 in July 2018 to 49.4 in July 2019, the European Union showed a fall from 55 to 46.5 in the same period, while the manufacturing PMI in the United Kingdom fell from 54 to 48. This slowdown or even contraction of economic activity helps explain the lower growth rates in these areas.

The main areas of significant growth worldwide continue to be emerging economies, where BRIC countries stand out. But of these four the two main ones because of the size of their economies and the pace of growth are undoubtedly China and India. In the latter, the manufacturing PMI over the last 12 months is oscillating around 53 points, with better performance for the manufacturing PMI than the PMI services.

China, on the other hand, shows a slightly lower but equally stable manufacturing PMI around 50 points, but unlike India, the PMI services have performed better than the manufacturing PMI. Although both countries show stabilization rates, the growth rates of their economies remain the highest in the world.

Read also: Round of tenders for oil exploitation of the Amazon coast in Brazil

The eurozone ... the worst area

The main economies of the eurozone show the worst performance of the great economic powers in the world. Germany, the locomotive of the European economy has registered the biggest drop from a manufacturing PMI index of 56.8 in May last year to 41.7 in September 2019. Italy and Spain have also shown the same trend, not so abrupt, but if it is currently below 50 points in the last 4 months. France, although its tendency is also negative, is more subtle, and last month it had an index of 50.1, slightly above the threshold that marks a contraction of industrial activity. The eurozone as a whole fell to 45.7; its lowest level since the debt crisis in 2012. 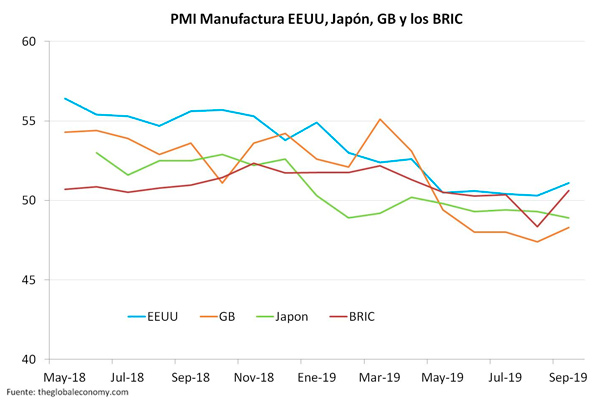 The fall in the PMI index of the manufacturing sector of the main economies of the planet, is the result of the slowdown in investment that occurs in these countries and has also been affected by the intensification of the trade war between the US and China , who They are the two largest manufacturing economies in the world. For now, we cannot speak of an economic recession in general, because the services sector shows a behavior that is not negative, but because manufacturing is the core of production, it cannot be ruled out that a global recession for next year.

[i] The PMI is an index that is obtained from surveys of the main 400 companies by country, which aims to know the performance of their economic activity. The index has a scale from 0 to 100. If the index is above 50 it is understood that there is an expansion, if it is equal to 50 there is stabilization and if on the contrary, it is less than 50 it is understood that there is a contraction. This index is measured monthly. The PMI manufacturing yields the results of the study of certain key variables in the industry: production, new orders, export orders, late work, product prices, prices of raw materials and inputs, supply delivery times, inventories of goods, the quantity of purchases, inventories of purchases, employment, and future production.