2019 was the year with the most deaths of environmental leaders registered by the organization Global Witness. Colombia leads in this statistic.

Global Witness report points out that women who act as social leaders are the main victims of murder for carrying out their work. / Photo: Global Witness NGO

According to the English organization Global Witness, the total of leaders killed worldwide for protecting the environment and natural resources was 212 people, Colombia and the Philippines ranked first and second with a total of 107 leaders killed between the two countries.

Women as caregivers and protectors of nature continue to be the main victims through the use of sexual violence as a tactic to silence them, in events that are not reported by the organization. 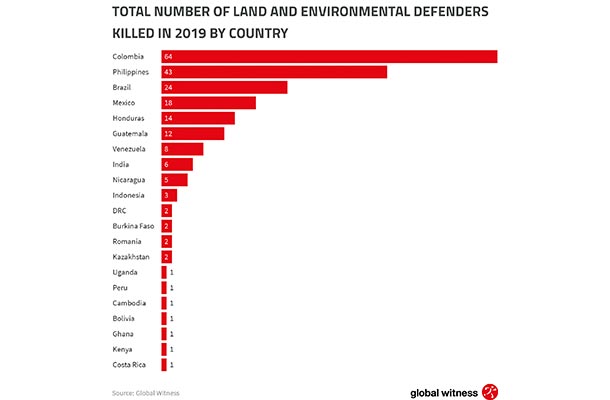 Despite facing these violent threats, defenders around the world made several achievements in 2019, testimony to their resistance, strength and determination to protect their rights, the environment and the global climate according to the report of the English organization.

The threats were mainly related to the development of energy mining projects. Rachel Cox, Global Witness campaign manager, noted that: “Agribusiness and oil, gas and mining appear as the main triggers for attacks against people who defend land and the environment. At the same time, they are the industries that promote climate change through deforestation and increased carbon emissions. ”

“Many of the worst environmental and human rights abuses in the world result from the exploitation of natural resources and corruption in the global political and economic system. Defenders of land and the environment are the ones who oppose this. ” Cox concludes. 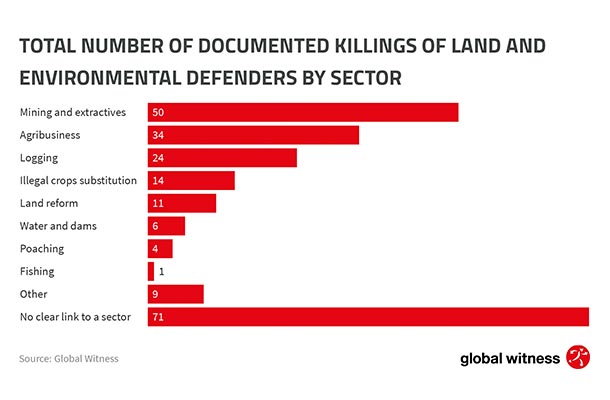 The Global Witness report analyzes the figures in detail and explains that: "Shockingly, more than half of all the murders reported in 2019 occurred in only two countries: Colombia, with the highest number recorded: 64 murders in a year and the Philippines that increased from 30 murders in 2018 to 43 in 2019. ” Worldwide, the actual number of homicides is likely to have been much higher, as cases are typically not documented, the report states.

The situation in Central and South America is critical considering that half of the countries with assassinated leaders are Latin American.

The Woman Post spoke with two Colombian environmental leaders to learn about the current situation of women who are fighting to protect the environment in their country.

Francia Márquez Mina, leader of the department of Cauca in Colombia, noted for her fight against illegal mining, winner of the Goldman Environmental Prize in 2018, expresses concern about an economic model in Colombia that is devastating natural resources and the leaders who protect them.

For Francia , "there are communities that are being forcibly displaced from their territories", "and if you look carefully at the places where the armed conflict in the country is intensifying, you can show that there is an extractivist economic project" . The environmentalist explains to The Woman Post, that for them, "there is a strategy of emptying the territory in violent terms that ends in assassinations of social leaders and members of the community."

The maps of the armed conflict in Colombia overlap with the maps of the country's development projects, denounces the leader, and on these places there is displacement and emptying of the territories, "for us that shows why there is a flare-up of violence." 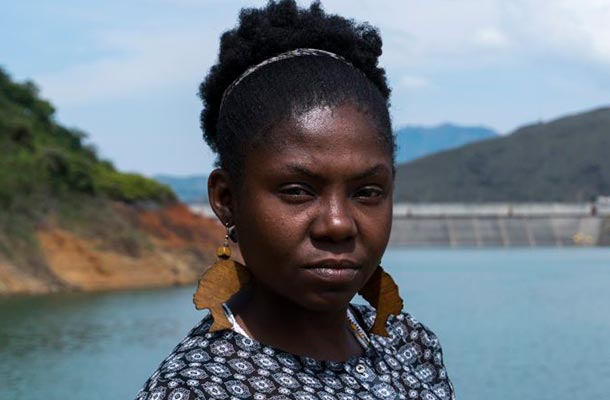 "The murders occur to generate fear among us, so that we do not raise our voices in favor of life, the big house and the territories."

For the environmentalist, the country is experiencing difficult moments and "the pandemic has uncovered the real face of an unfeasible policy that is not guaranteeing life and today the crisis is uncovering the injustices that are the product of patriarchy, machismo, racism and the same policy of death ”, she emphatically affirms.

But what is the link that women have with environmental protection and why is their vulnerability so high? The Global Witness report states that one in 10 people killed was a woman.

"We as women have a territorial roots, an umbilical link with the territory that occurs from the cultural practices transmitted by women and that is why I believe that there is a higher level of commitment and sensitivity of women to the need to care for the territory as living space. "

"As women we have that instinct for caring," says Francia, "we have maternal love for the territory in the same way that we care for life, women not being immersed in the politics of death, is evidence that the greatest caretakers of territory and of life are women in the world ”.

The position defended by the environmentalist is based on the fact that, “Men make greater decisions in favor of economic development and politics, and those decisions made by governments that are mostly represented by men and that obey the strengthening of an economic model that contributes to accumulation are part of the strategies that are used for violence and that end up murdering women ”.

Isabel Cristina Zuleta, Colombian environmentalist, Antioquia sociologist and director of the Ríos Vivos Movement, agrees with Francia Márquez when she affirms that megaprojects, illegal logging, mining, are never isolated, for her they are related to the dispossession of communities and that is why the leaders come out to face those kinds of realities that end the lives of the defenders of the territory. 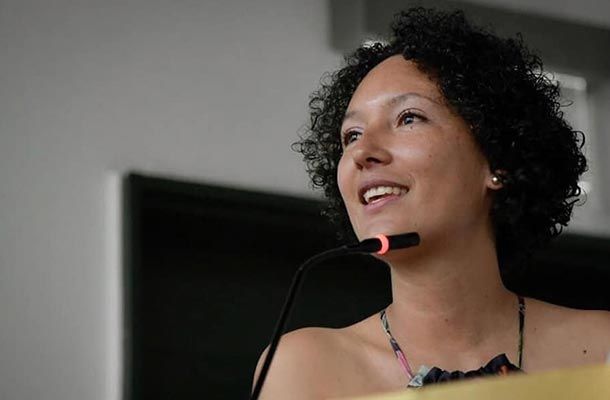 "The prevailing model has a spirit of accumulation and the main source of it today is nature" explains Isabel Cristina. "There are those who want the assets of nature so that life is possible and others to accumulate capital and these views are opossed." For the environmentalist, they are two opposite poles and they are interests without middle points "there is no agreement". It is impossible for her to maintain two perspectives on the same territory. In accordance with the report of murdered leaders of Global Witness, the environmentalist explains to The Woman Post, “That the climate crisis reveals this impossibility of agreements, a territory destroyed by mining, for example, is impossible to inhabit, it is the life of present and future generations that we risk in environmental defense. "

Not only is it the life of the leaders, says Zuleta, "because the leaders went out to face the possibility of existence in that specific territory", the sum of all the impacts are not only local, they occur on a planetary level. "We have an interconnected planet and the damages that are generated in a territory, the greenhouse gases that are produced, for example, by a project like HidroItuango, a dam located in the department of Antioquia, do not stay here in Colombia," says the environmentalist. "And they do not have specific borders on geopolitical maps, but they have an impact on the entire planet."

Isabel Cristina Zuleta says that the upsurge in violence at the global level will continue to increase, “because our voice of protest is against the knot of capitalism that continues to motivate accumulation and those interested in continuing the model of dispossession, accumulation and destruction of nature are all over the planet ”.

The dispute is evident, because the humble communities of fishermen, who extract gold from the rivers like the boatmen, the peasants who are around a controversial project like HidroItuango, want the territory for something other than what is planned and granted throughout it; explains to The Woman Post the antioqueña environmentalist who defends the rights of communities located in the area of ​​influence of the Hidroituango Hydroelectric Project in Antioquia Colombia.

Zuleta adds that the hate speech and stigmatization and the prevailing beleifs of institutions that want to hinder the development of the country without taking into account that the organizations have serious environmental proposals for development, encourages the assassination of the leaders in Colombia. "The ease with which words are emitted that stigmatize and point out in Colombia, is terryfying." "And women bear that burden, when they force us to think, things like public life is not for us, that encourages violence against women and that is why they murder us.

And in the defense of the territory by the role of women as caregivers, the vulnerability of us is high. "Women are seen as an obstacle, the leadership of women is pointed out and is seen as a hindrance, just like our voice, that of indigenous people and Afro communities, just as the voice of children is ignored, because only some have the right to express an opinion and those are the same as always, ”explains Zuleta. And she adds: “Men, whites, wealth holders and owners; in the mistreatment and murder is the patriarchy of our society ”highlights Isabel Cristina.

But it must be clarified according to the Colombian environmentalist, "that in this protection leadership, we are not only called to care for women, we all have the responsibility to protect our territory and the planet".