When we think on the neotropical coasts, there are vast beaches of white sands, with some coconut trees, crystalline waters, and millions of species of fish, corals, mollusks, and crustaceans that adorn our work of immersion in the fantastic world of characters like Nemo or The Little Mermaid. However, not everything in the Latin American tropic is beach, breeze, and bikinis.

Mangroves are ecosystems whose importance is perhaps only comparable to the incomprehension they suffer from humans. They are landscapes of strange trees with aerial roots, called Mangles. They make them look like strange knights mounted on stilts of great dimension, entangled in their bases, locked by the roots of others that prevent them from running when hurricanes or storm come. These noble trees, of immovable posture, are strong knights and loyal to the defense of the coasts, stable clinging to the substrate to detract from the power of the great waves and protect the communities that from immemorial times live from their immense resources.

However, the Mangroves are as resistant and solid to the onslaught of the sea, as they are dynamic and flexible, given the water conditions with which they interact. They live mainly in areas where the rivers bring fresh water from the continent to deliver it to the vast oceans of salty waters. These trees support the salinity as much as the sediments carried by the rivers that are filtered among their millions of roots that act as an immense sieve that allows the water to be more crystalline inside.

From among its tangled existence, it is possible to extract wood, fibers for construction and handicrafts, food, medicines. Mangroves are eternal guardians of the constant flow of matter and energy that allows life to move forward despite the adversities of extreme weather events. 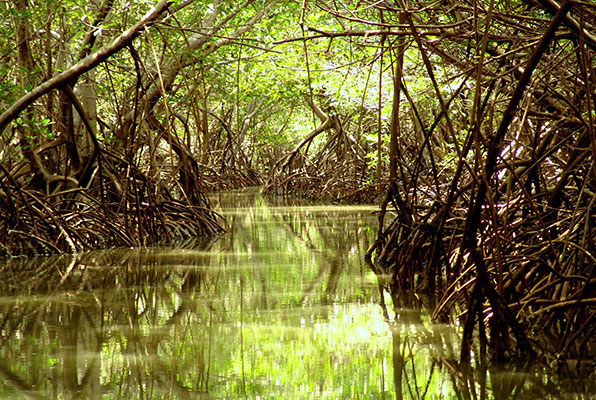 Latin America and the Caribbean are areas privileged by nature, since in the world the mangrove area occupies more than 16 million hectares, of which 35.5% are found in Latin America and the Caribbean. However, it is an ecosystem seriously threatened because of the little understanding we have of their usefulness, of their health and, above all, of the benefits they bring to the communities.

The wisdom of nature has given them an immense taxonomic variety. In fact, mangroves are so important in nature for the proper functioning of diverse ecosystems, in addition to those that conform themselves, which has a very important diversity. There are more than 50 different species of mangroves in the world, in 16 different families, each of them with specific characteristics that particularly serve the ecosystem in which they are developed.

They are true equilibrists of the natural world, not only for their outstanding stability on the ground that seems an eternal dance of these trees, also for the harmony they find through different mechanisms to survive. In nature, everything has a perfect measure, this is the case of the mangroves, which resist the salinity of the sea waters. However, too much salt inside them, would kill them and that is why they developed several techniques to eliminate excess salt in their organisms.

It is through the exclusion of the Red Mangrove (Rhizophora mangle) and secretion, as does the Black Mangrove (Avicennia germinans). The exclusion is made through the loss of leaves that already accumulated such levels of salinity that the mangrove cannot stand. At that moment, their leaves fall as deposits of substances that complete their cycle. On the other hand, the black mangrove realizes the secretion of the excess of salt through the pores of its leaves exposed to the wind, the animals and the water of the rain, the remains of salt of its organism so that they return to the cycle.

The force of the rivers that flow IGNORE INTO the sea has an erosive effect on the coasts of the whole world. Thousands of millions of tons of sediment are deposited annually in the seas from the continents in a beneficial and natural process. However, mangroves avoid a harmful process called over-sedimentation. In nature, there are balances, little is bad and a lot too, balance is indicated. That is why mangroves are fundamental as sediment retainers through their intricate structures.

Not only do they serve as insurmountable strengths for tropical storms and as natural filters that avoid over-sedimentation, they are the cradle of thousands of species of fish, molluscs, and crustaceans. Hundreds of these species serve to sustain the economy of the communities settled in the vicinity of the mangroves.

Species such as tarpons and snappers are only a small sample of the fish that are born and raised in the waters of the mangroves, finding refuge among their roots hiding in their labyrinths of their largest predators. Seabirds, such as pelicans, frigate birds and cormorants, which are fundamental to the healthy maintenance of commercial fish species, depend closely on the mangroves that shelter them and shelter their nests.

Mangroves are also related to reptiles, such as the American crocodile, large manatees, birds of prey such as eagles and hawks, monkeys of various species and of course turtles, amphibians, and countless organisms that provide balance to the ecosystem while providing food and economic support to the communities.