The unemployment rate stands at an admirable 2.7%, but the richest 1% of the country has income equal to the sum of the poorest 40%

For the total average of the country, the INE placed 59% of the population in poverty and 23% in extreme poverty. The Institute also noted that the richest 1% of the country has income equal to the sum of the poorest 40%. In addition, according to the INE, inflation closed at 4.86% in 2017, 0.43 points above the previous year. 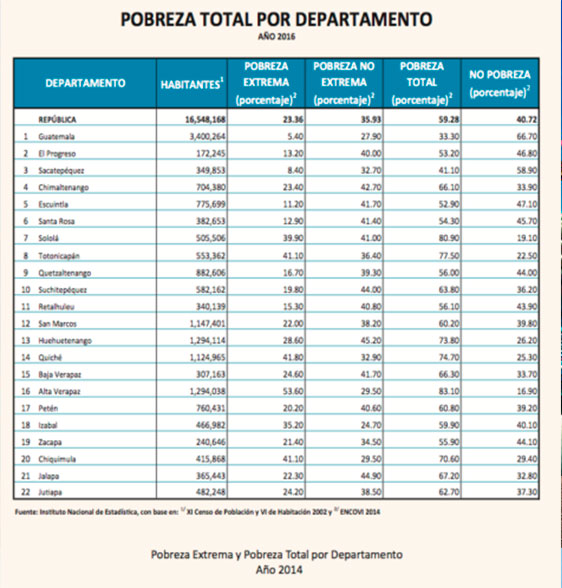 We must ask ourselves, then, why this inconsistency between the unemployment rate in Guatemala and the poverty and inequality rate?

The incidence of informal work

According to the National Survey on Employment and Income (ENEI), of the 16.2 million inhabitants of Guatemala, only 41% belong to the Economically Active Population, that is, the capacity to work. Of this 41%, 70% is dedicated to informal work which covers, citing the Republic magazine "activities of commerce, technical services, manufacturing, office and professionals on their own account". These are the results of the magazine Guatemala en Números (GTN) regarding informal work in the largest municipalities in the country:

In the municipality of Guatemala, only 16.8% of employees have formal employment in a formal company. In Huehuetenango, this figure is reduced to 1.56%, in Alta Verapaz to 1.7% and in Quiché to 0.72%. The problem with these indexes is that only in formal companies can guarantee to workers fixed salaries and health insurance.

Also read: The wealth of these five Latin millionaires exceeds the GDP of entire countries

Hand in hand with informal work, there is the factor of the low conditions that the country has for education, which prevents citizens from accessing formal jobs. In the town of Guatemala, the town with the lowest illiteracy rate, 9% of the population is illiterate. In other places, such as Alta Verapaz, this figure reaches 36%, according to the Guatemala study in Figures 2017 of the Banco de Guatemala.

Another factor that affects the economy of the country is that, according to the Center for National Economic Research, "there is no route or growth model that we are betting on". In addition, "the lack of legal certainty has scared the country's investors." Added to this, according to datosmacro.com, the "Corruption Perceptions Index of the public sector in Guatemala has been 28 points, therefore, the perception of corruption of Guatemalans in their country is very high".

Salaries below the minimum

Another important factor is that while unemployment is low, wages also. According to the National Employment and Income Survey, the average national salary is Q2100 (280 USD), which is lower than the legal minimum wage. In addition, the highest minimum wage reported in the formal sectors is 400 USD, while, according to the independent newspaper Prensa Libre, the basic basket in the country costs 467 USD. This includes 34 products for a diet of 2,262 calories and reaches 4 people, but does not include certain basic products such as butter.

Finally, the World Bank notes that "an increasingly important challenge for the country is to improve citizen security indexes. High levels of crime and violence in the country lead to overwhelming economic costs. "In addition, it emphasizes the need to create inclusion plans for indigenous communities, since 52% of the unemployed in the country are indigenous.