Millennials represent the highest unemployment rate because of the negative stereotypes in which they have been typecast. Here we tell you how to break with them

In recent years, the millennial generation has massively joined the world of work. This event responds to the demographic phenomenon in which 25% of the world population and 30% of the Latin American population is between 24 and 36 years old, according to Antoni Gutiérrez Rubí, a Catalan researcher. As a result, for the first time in history, baby boomers (55 to 72 years old), generation X (37 to 54 years old) and generation Y (better known as millennials) have to live and work together. However, getting a first job for this generation is not easy, largely due to the stereotypes in which they have been pigeonholed, and the rejection of the previous two generations.

The Millennials generation goes beyond a particular age range, it is the generation that grew along with the technological development . His youth, his affinity for technology, his need for feedback, his innovation character, his ambition for growth, and in many cases his lack of employment, betrays them. It is the generation that wants to eat the world with bites and the generation that has been pigeonholed as capricious, uncommitted and with little business loyalty, which makes it impossible for companies to give them their first opportunity.

For example, in Mexico it is the generation that represents the highest unemployment rate as seen in the following graph obtained from the National Survey of Occupation and Employment (ENOE) until the last quarter of 2017, drawn up by the National Institute of Statistics and Geography (Inegi). ). 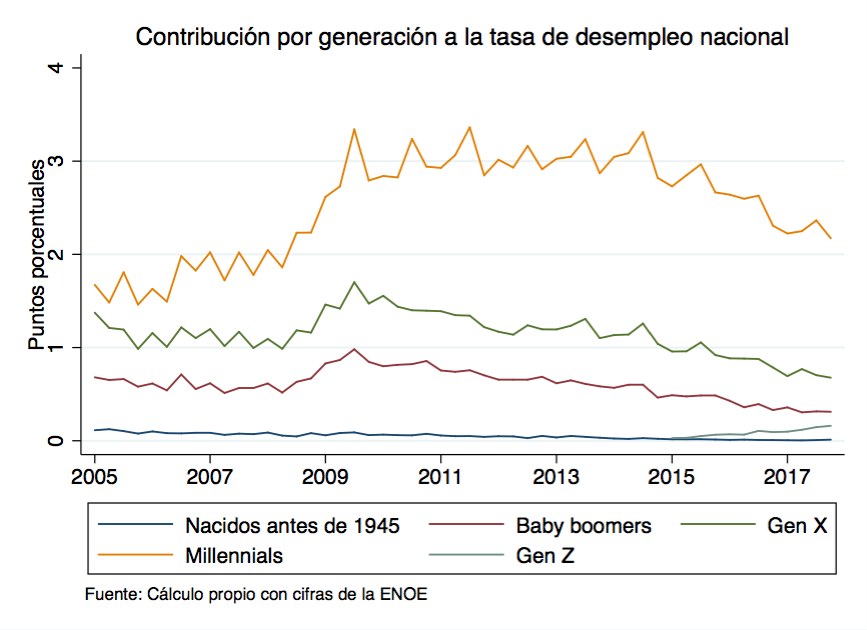 This graph clearly shows how consistently, the millennials have suffered unemployment, including one could say that it was the generation most affected by the crisis of 2008 and has not yet recovered from it, however, is not the only obstacle which they face. The labor market has not been able to give employment opportunities to this generation, because, although there is an attempt to give jobs with good conditions to millennials, companies are not generating the jobs needed at the speed of demand. In addition, it is evident that the labor market has problems absorbing millennials, since they present a new challenge for many companies that refuse to update themselves.

Read also: Ready to work with Milennials? So they behave

Another factor why millennials are unemployed is lack of experience. While many young people do internships during their university studies, a large part of the generation has no experience. Thus, the search for employment becomes a vicious circle, because on one hand, employers demand that millennials have previous work experience, and on the other, they are not willing to give them the opportunity to have a first job in which they can acquire this experience. Being this an incongruous limitation.

If you are a millennial and you are within this unemployment graph, calm, not everything is lost. Here are five suggestions that can help you get a job.

1. Look for opportunities that give you experience in the branch you want to develop. Internships are a good option to acquire this experience that companies ask for. And although many are not paid, it is always possible to get a part-time job that gives you a fixed income. If you are a university student, take the opportunity to do internships.

2. Avoid the myth of lack of commitment. Make a list of both work and personal goals, distribute them for years in order to fulfill them and demonstrate commitment.

3. Learn languages and live experiences that allow you to leave your comfort zone, such as volunteering in other countries. These skills will make you leave the job competition.

4. Avoid generational conflicts. Before engaging in discussions and stereotyping your predecessor generations as outdated, find a way to consolidate their ideas with yours, and innovate in the area in which you wish to develop.