The San Diego women's prison in Cartagena becomes every night, a cooking workshop open to the public.

The San Diego women's prison in Cartagena becomes every night, a cooking workshop open to the public. Pink walls, pom-poms hanging on the bars, curtains, chairs, napkins. Everything is pink in the Internal Restaurant.

In the day it is a place of workshops where inmates do all kinds of activities, from crafts, weaving, computer classes, and yoga. But at night, the internal workshop house receives 25 women who spend their time in jail serving one of the best restaurants in the iconic coastal city of Colombia.

Behind a pink curtain is the reality of 25 inmates of the San Diego women's prison in Cartagena. But, meanwhile, for a few hours a day, they become waitresses and cooks who serve this restaurant that turns 3 in December. 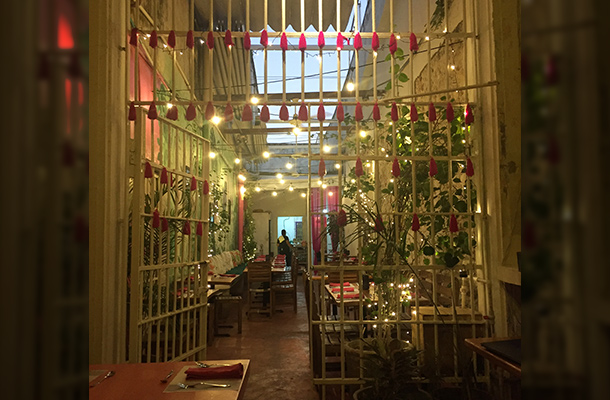 When I look out to take a quick look through that curtain, I see the reality of the inmates: bars and a room where they spend most of their days while waiting to return to freedom. The pink color ceases to prevail and the white of the walls, the cells, and the floor begin to create a sensation, ironically, of darkness; of confinement, seeing that it is easy to understand why those few hours in which they become responsible for a restaurant are so important for their personal processes.

Upon entering, a woman is sitting reading, waiting for the day to begin, at 7 p.m. Isabel Montaño has been in jail for 4 years, of which she has been in the restaurant for almost 3 years, working there and now she has a year to finish serving her sentence.

Montaño lowers her book when she sees an unknown woman hanging around the tables when the restaurant is not yet open to the public. She is in charge of organizing the entrance, so she leaves before the others and starts organizing. She starts telling that inmates rotate every year so that they have more opportunities to participate in the restaurant. Meanwhile, those that do not, can be part of the other activities that also include gains and benefits for them.

A few minutes later, having interrupted the reading that can no longer resume because the other interns are already leaving to finish organizing, begins to organize the counter at the entrance. There, they show other of the work they do in the other workshops: necklaces, clothes, and purses that they sell at the restaurant's entrance during the night. 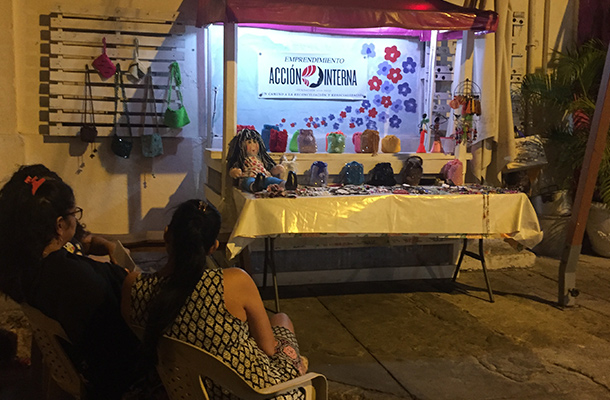 Johana Bahamón, the Colombian actress, arrived in jail in October 2016, in search of strengthening the Internal Action Foundation, dedicated to the resocialization and dignification of prisoners in Colombia.

While recording the novel Tres Milagros, which told the story of three women who turn to the life of crime, was, along with the cast, invited to an event at a women's prison in Bogotá. There, he began to fall in love with the issue and decided to set aside his acting career to start the Internal Action Foundation and create programs of all kinds within prisons to help people deprived of liberty.

It has been a joint process with the Ministry of Justice because the idea is to achieve a true reintegration of people deprived of liberty when they can leave and have a second chance. To do this, with its other projects that include even an advertising agency inside the La Modelo Jail for men, in Bogotá, it has achieved that the work is rewarded with benefits such as having access to a review and reduction of the penalty and Family bonds.

In addition, the training provided by the foundation has allowed them to get jobs and have a chance to prosper, which is usually complicated by the mere fact of being in jail. For example, in the case of the restaurant, many come out with cooking or customer service skills. For this, the foundation has alliances with other restaurants so that they can start working there once they are free. “It's very nice to see how many of those who have left San Diego prison in these years already have jobs in good restaurants in Cartagena, others have opened their own places,” says Johana Bahamón.

Rosa Vergara is currently the head chef. With a child in the distance, she makes the most of her days in the Internal Restaurant to get out of there soon and see him again. She is not from Cartagena but from another town of the Colombian Caribbean coast, and due to economic difficulties, her son has not been able to visit her in the years she has been in jail. But that no longer affects him so much, because what he learned there has been much better.

"Not everything is pink as the painting literally shows,'' says Rosa from the other side of the kitchen, separated by a white bar door. After all, we are in jail. I can not cross a limit that is this door and that is to lose the release. 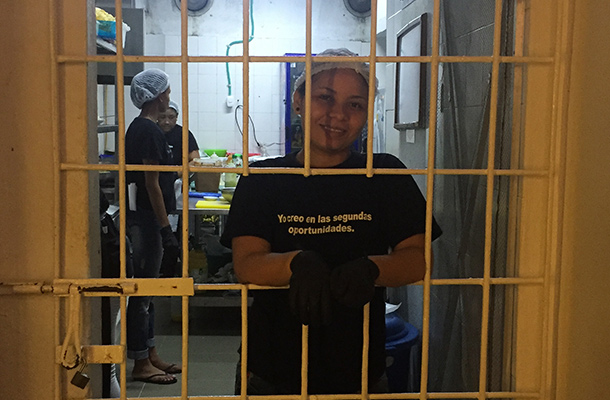 She entered years ago by a concert to commit crimes, for supporting her partner at the moment and her son's father. And although, of course, she regrets the crime, she does not regret that life has taken her there. With a smile and shy eyes, perhaps out of shame to accept that she lives well in jail, she says she now has all the tools to go out and be a good mother, daughter, citizen and, in addition, an excellent cook.

In the conversations, the word "dignification" came out repeatedly. It might seem like a learned speech, a motivational talk. But their eyes lit up every time they say the word, which for them is synonymous with second chances.

- It's a great project, especially dignifying - says Isabel, as if her life had turned around since 2 years ago. As if a person was reborn and started again after bad decisions, rejections, and disappointments. Time in jail is never easy, but the foundation makes the day go by faster and time is friendlier.

The Internal Action Foundation, with one of its most ambitious projects such as the Workshop House / Internal Restaurant, has managed to form the basis of a resocialization program that makes prisons in Colombia a learning place where inmates have the possibility to grow and be able to return to work and social life once they have served their sentence.

"We all commit mistakes, but only a few have a chance to remedy them and it shouldn't be like that, ' ends Bahamón. 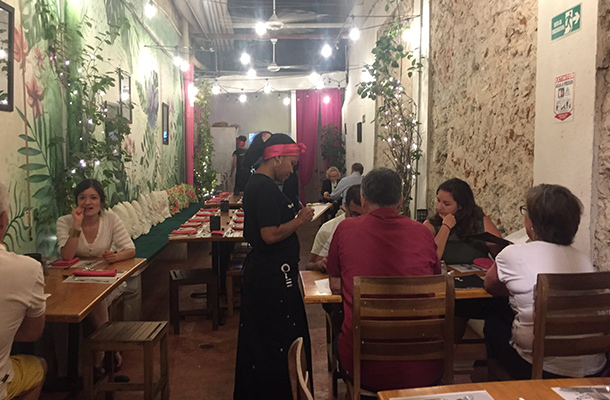