The document includes the number of victims of crimes such as kidnapping, forced disappearance, extrajudicial executions, and forced displacement. In addition, it defines who are the actors in the conflict and the importance of true reconciliation.

On June 28, the so-called Truth Commission of Colombia, a "state entity" born within the framework of the Peace Agreements between the national government and the former FARC guerrilla, delivered its final report in which it explains, precisely, what is that truth that was reached in relation to the forms in which the armed conflict in Colombia took place and the humiliations that were committed during that stage. 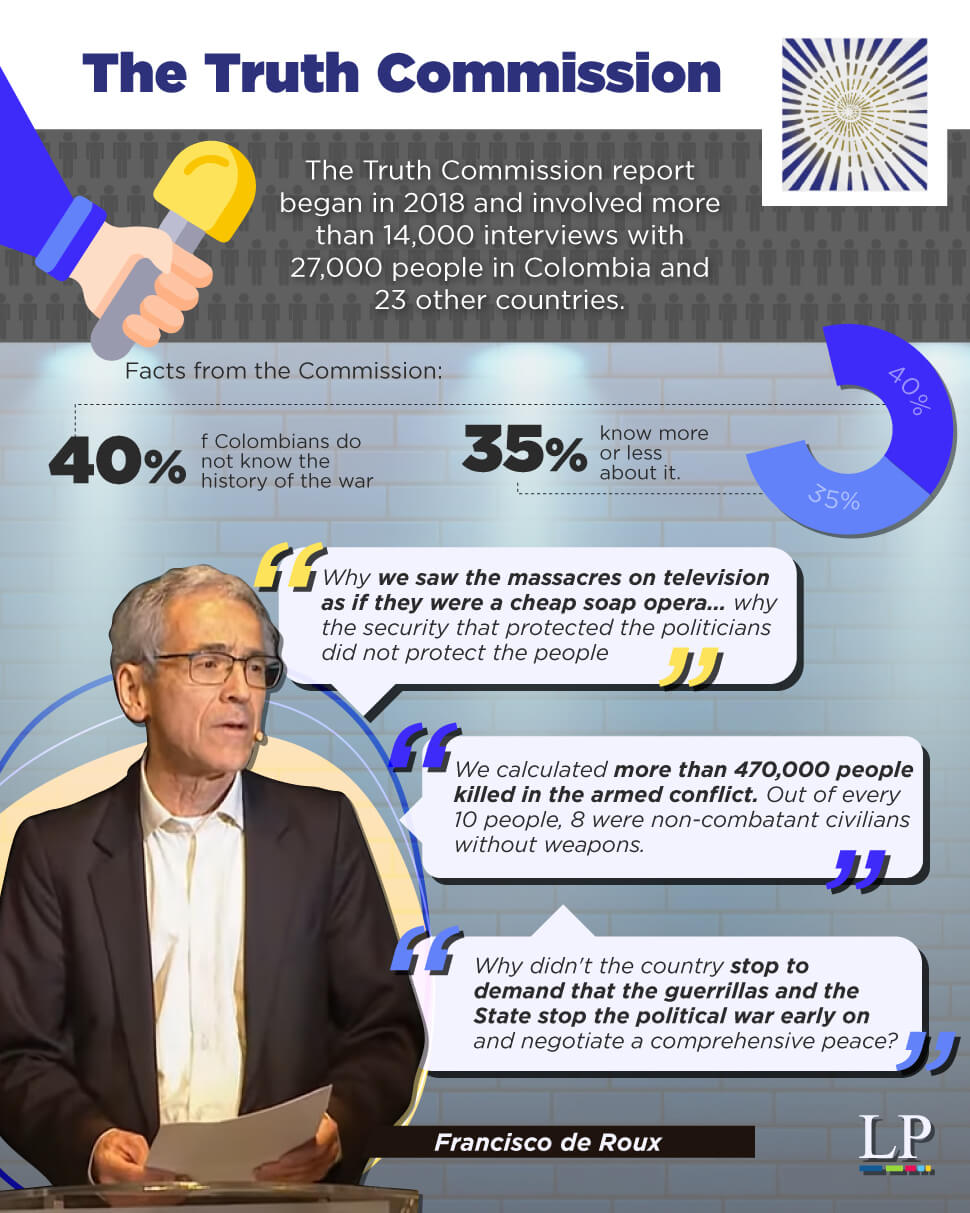 In addition, the main armed actors are discussed and an attempt is made to highlight the strategies to be used from now on to achieve genuine reparation within the framework of dialogue, peace, and social forgiveness in the country.

“The Commission received the mandate to clarify what happened during the internal armed conflict that Colombia has experienced; promote the recognition of responsibilities, as well as social dialogue and coexistence, all of this within a horizon that would allow us to leave the war behind forever”, explains the final report of this entity that has almost 900 pages.

Thinking about the importance of this document and the task of the Truth Commission in the search for Justice, Reparation, and Reconciliation, LatinAmerican Post brings a brief summary of some of the most important points of this report. The document seeks, as Priest Francisco de Roux himself said, president of this commission, to bring a "message of hope and future for our violated and broken nation."

The victims of the conflict

To begin with, the Truth Commission focused its conclusions on the most important actor in the Colombian armed conflict: the victims.

"We did not have to have accepted barbarism as natural and inevitable or have continued business, academic activity, religious worship, fairs and football as if nothing was happening", is the first appreciation that is evidenced in the report, then asking several important questions regarding this topic:

“Why didn't the country stop to demand that the guerrillas and the State stop the political war early and negotiate a comprehensive peace? What were the State and the institutions that did not prevent and rather promoted the armed conflict? Where was the Congress, where the political parties? To what extent did those who took up arms against the State calculate the brutal and macabre consequences of their decision?”, among others.

And it is that according to the report, only the number of fatalities left by the conflict in Colombia exceeds more than 260 thousand civilians , according to information from the National Center for Historical Memory; Although this figure, considered from the Truth Commission, may be conservative, since the total number of deaths during the war is still uncertain.

However, the list of non-fatal victims is even more uncertain, and, according to Francisco De Roux, if the names that are available to date are read, it would take more than 17 years to read them completely. "The list is endless (...) the pain is immense," said the commissioner during his presentation in Bogotá.

However, there are some figures that could be compiled almost exactly in this document: between 1958 and 2019, more than 4,230 massacres were perpetrated in Colombia; between 1978 and 2016, the list of extrajudicial executions (also known as false positives) amounts to more than 8,200 people; forced displacement left between 7.7 and 8.2 million victims; while regarding the crime of kidnapping, the Commission places the FARC as the armed group with the greatest responsibility in this scenario, with more than 20,220 victims, that is, 40% of the total kidnapped during the conflict.

"The atrocities, such as mutilating bodies, throwing their remains into rivers, or burning them in crematorium ovens show the extent of dehumanization and horror on a large scale," explains the document, showing the harshness of the war in Colombia.

We suggest you read: "Tantas Almas": Another Face of the Armed Conflict in Colombia

Responsibilities in the Armed Conflict

On the other hand, the Commission also completely overturned what are considered "armed actors in the Colombian conflict" by including not only the Military Forces as perpetrators in some horror scenarios but also businessmen, politicians, and other citizens. that, although they acted like strangers to the battlefield, they also had a presence from civilian life in the conflict.

“There were millions of victims, but not because one day someone had the sudden idea of going out to kill or bomb towns. Everything happened in a complex system of political, institutional, economic, cultural, military and drug-trafficking interests,” the Commission indicated.

On this point, the document is clear in naming, one by one, the actors that had one or several responsibilities within the internal war in Colombia: “The paramilitary groups, the guerrilla groups, the state entities and civilian third parties from the economic sector, politician and regional elites, have woven and acted through alliances”.

Finally, the report shows a final look at the possible solutions to achieve peace, which the same Commission considers more a “challenge of reconciliation”. In Colombia it is still difficult to “build the rule of law that was absent”, taking into account that the war in Colombia is not over yet.

"The violence articulated with politics and money continues in various ways because the problems presented in the findings have not been resolved," the report states, assuring that "to solve them we need to be a society that makes the victims' pain their own, that says “no more” (…) A society that, without turning the page of oblivion, has the courage to build on differences, incorporating those who have hated each other, to enable a dialogue in the respect that true democracy does”.