Will Red Dead Redemption Online overcome the experience of Grand Theft Auto V's online version, a success since its release that does not seem to decline?

In October of last year, one of the most anticipated games arrived in the markets. After years of waiting, Red Dead Redemption II, the prequel to the title with the same name that enchanted millions of gamers around the world, was launched. In its first week on sale, Rockstar -the producer of this and other beloved videogames worldwide like Grand Theft Auto or Bully- managed to raise $ 725 million dollars in sales.

After two weeks, it managed to sell more units than his predecessor. The second installation of this series (because the first one is called Red Dead Revolver ) has sold 15 million copies to date. Red Dead Redemption II reached seventeen million in the time stipulated above, according to Forbes. 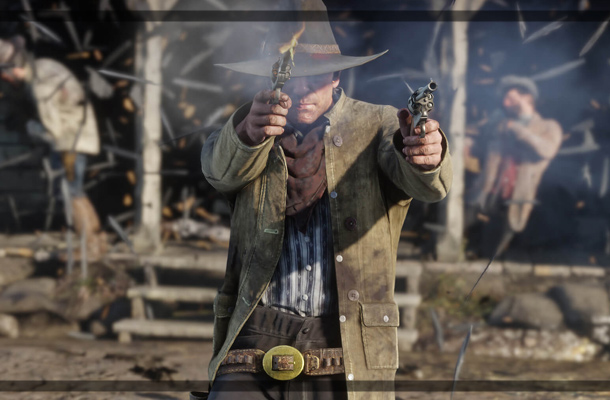 For those who got here out of pure curiosity and have no idea what I'm talking about, the Red Dead series, with three separate titles so far, is an open-world video game focused on the American wild west between the late nineteenth and early twentieth century. One takes the role of a bandit, completes missions to earn money and prestige, and goes around doing different activities, from stealing trains to hunting animals to make wallets, ammunition belts and more essential items for survival.

The game is globally acclaimed for offering over sixty hours of activity, a deep and dramatic story, and impeccable character building.

Within a month of launching the prequel, Rockstar put online the Red Dead Redemption II online mode, an equally expected gameplay mode for the same game release. This is partly due to the success of the online mode of Grand Theft Auto V, which was published in 2013 and which today has a figure close to one million users between gaming consoles (Playstation 4 and Xbox One) and computer.

Also read: Do you want to buy a video beam? 5 tips not to fail

The video game makers are constantly launching updates, new missions, cars, weapons, clothing, etc. so that consumers do not get bored. This is the goal to overcome his brother of the Old West.

Last week, RRD II outperformed its beta version to instantly publish the final version. This update came with new main missions; new activities such as prison escapes and train theft; new options like being hostile or defensive, depending on whether you want to face death with the first real player you meet or if you want to go unnoticed so you do not kill him with your horse; poker against other players; gang combats in different ways, such as fishing, bird hunting and herbal collecting -we know that this does not sound very exciting, but they give a lot of of money and experience for that-; among other exciting new modes.

Introducing the Wild Animal Kills Challenge in Red Dead Online
Prove your status as a big game hunter and accept an invite to this new Free Roam Event
As the challenge unfolds, prized and dangerous predators like wolves, cougars and bears emerge – take them down for bonus points pic.twitter.com/eLCPWlbAxz

What challenges does the new online mode have?

Being Red Dead Redemption II one of the best titles of the year, the online mode has an expectation equal, if not higher, than its offline version. In addition, we must put into the equation the online version of GTA that has been taking new content for six years and its audience has not yet declined. According to Fraghero, only in the online version of this video game, Rockstar has collected a little more than 500 million dollars. Yes, I also rub my eyes to see if the figure I read was wrong. This is partly due to the microtransactions of the video game that require real money.

Red Dead Redemption Online has a pretty had a really high expectation, but, in the week that the mode has been published, people are happy.  Some pitiful episodes typical of launchings have passed, such as how one day the desert was full of dead horses and one could not take the missions offered by the NPC, or non-player characters. Rockstar has been pending to fix these errors so that they do not last more than half a day.

You may be interested: What is the 5G network? The next great technological innovation

There are only two worries: that they neglect GTA to focus on the Red Dead online, or that Rockstar does not have enough equipment to make the RDR II online as dazzling as the GTA. In both cases, the solution is that Rockstar enlarges its production team.