The outcomes of penalty kick shoot-outs in soccer have always been important in international tournaments and this copa America has not been the exception. Luis Suarez broke down in tears after his shootout miss saw Uruguay dumped out of the Copa America by underdog Peru on Saturday, the 15 times champions lost 5-4 on the penalty shootout.

This followed reigning champions Chile advancing to the semifinals of the Copa America after beating Colombia 5-4 in a penalty shootout and Brazil avoided a repeat of history after beating Paraguay 4-3 on penalties and advancing to the Copa America semi-final. Paraguay had eliminated Brazil twice before from the competition in 2011 and 2015 in quarter-final penalty shoot-outs.

A common question surrounding these shootouts is whether or not the end result is a matter of a lucky day or skill and strategy. Clearly, skill is required. But once this is achieved, is it strategy or the soccer gods that determine the winner?

It seems that most believe luck to be the determining factor in a shootout. It is common to hear sportscasters saying this way of determining a winner is a “lotería” (lottery). It also seems that coaches use a shooting strategy based more on intuition than on qualitative analysis.

Well, scientific studies show that, even though other factors may influence the result, success is highly dependent on strategy.

Before I get into this, I will briefly describe what a shoot-out elimination is to our readers that are unfamiliar with the shoot-out. The penalty shoot-out is used to break tied games in the knock-out stages of soccer competition. It consists of an alternating series of penalty kicks and it is won by the team with the highest goal tally after five kicks. In the event of a tie after each team has kicked the initial five penalty kicks, the shoot-out progresses to ‘sudden death’ by increasing the total number of shots by one, until one team obtains a higher number of goals than the other after an equal number of kicks.

The team kicking order is determined by the toss of a coin and each of the players selected can perform only a single penalty kick, and this is where coaching strategy seems to play a major role.

In other words, the line-up order in which the penalty kicks are taken must be the main coaching consideration. Two researchers, Tim McGarry and Ian Franks, from San Francisco State University and the University of British Columbia, respectively, analyzed shoot-out outcomes and player order in a number of World Cups and the European Championships and discovered that the probability of winning a penalty shoot-out can be increased by assigning the first five penalty kicks to players in their reverse order of ability.

The researchers clarified that for this tactic to work, the coach should rank players on their penalty-taking ability. They added that their findings indicate that coaches must consider “the tactical substitution of on-field players for higher ranked penalty takers, including higher ranked penalty stoppers (i.e. goalkeepers), with a view to an impending penalty shoot-out”.

Where should the penalty be kicked

In terms of the use of the skill, coaches and players should consider where to place the kick. Another pair of researchers, Michael Bar‐Eli, from the Ribstein Centre for Sport Medicine Sciences and Research, and Ofer Azar, from Ben‐Gurion University conducted a study to find out what should be the kicker's best strategy when executing a penalty.

The study included data from 311 penalty kicks taken in top men's professional leagues worldwide (such as England, Spain, France, Italy, Germany, Brazil, and Argentina), and European, South American and World Championships. The analysis revealed that among the kicks that reached the goal area, no kick towards the upper third of the goal was stopped, while 12.6% of the kicks to the middle third and 19.8% to the lower third were stopped by the goalkeeper.

“These results suggest that the common practice of directing penalty kicks to the lower part of the goal (56.6% of the kicks reached this zone) is the least successful kicking strategy in penalty kicks. In contrast, the least‐used strategy of targeting the ball to the upper third of the goal seems to be the better strategy. It was suggested that the probability of winning a penalty shoot‐out can be increased with systematic practice, and recommended that training of penalties be practiced in a systematic fashion by soccer players. Along these lines, we argue that with proper training, targeting to the upper third of the goal need not result in high miss rates (i.e., kicking the ball outside the goalposts). We also claim that aiming to the top two corners would be an even better strategy than shooting to the top center”, the researchers added. 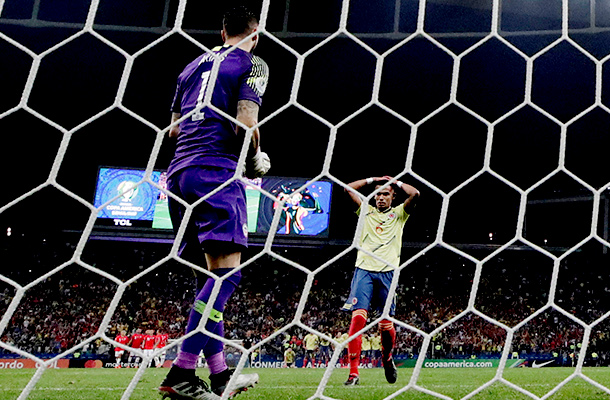 The LatinAmerican Post analyzed the Chile - Colombia shootout and, at least as it relates to this game, the research seems to be on point.

Colombian defender William Tesillo missed wide on a middle-low shot attempt in the second-to-last penalty, and Alexis Sánchez came in to seal Chile’s victory with another low shot into the corner.

Interestingly, Arturo Vidal, Eduardo Vargas, Erick Pulgar and Charles Aránguiz also scored for Chile in the shootout by targeting the ball to the upper third of the goal that, according to the research, seems to be the better strategy. Yerry Mina scored for Colombia by kicking to the middle-low part and James Rodríguez, Edwin Cardona, and Juan Guillermo Cuadrado scored by directing the kicks to the lower part of the goal or the least successful kicking strategy according to the research.

Analyzing the Uruguay - Peru’s game, one can see that Luis Suarez failed his shoot-out by kicking to the middle third of goal. The goalkeeper didn't have to do much, he even stopped the ball with his stomach. Suarez’s kick also seems to support the scientific theory. If a footballer wants to have bigger probabilities to score, he has to kick to upper third, opposite to what the Uruguayan player did.

The same thing happened with Paraguay that was eliminated after Gomez failed his kick against the Brazilian team. The paraguayan footballer pointed to lower part of the goal. The brazilian goalkeeper was able to stopped the shoouout and at the end that made Brazil to advance to semifinals.

Now, it is obvious that independent of strategy, the probability of winning a penalty shoot-out can be increased with systematic practice, both on the part of the penalty kickers and the goalkeepers. Nevertherless, the researchers seem to be right, at the very least, in terms of placement.