The protesters in Chile today have forced historians to write a new chapter around this statue.

Monument to Caupolicán in Temuco, Chile, after the demonstrations. / Photo: Courtesy

This sculpture, like all, tries to tell a story. A story that goes back to the 16th century when the Spanish conquerors tried to break the resistant Mapuches. But that story changed or at least, the protesters of Chile have now forced historians to write a new chapter of it with this photo that for many became poetry and that contains a message in the background of the social demands of a town that is not tamed by the fiercest of tyrants.

Temuco is the capital of colonization that still in the 21st century retains its viceregal inflows and looks at the Mapuche Indians as inferior. Proof of this are the refusals of Mayor Miguel Becker who since 2008 is mayor of this city and strongly refuses to raise the Mapuche flag because he considers that "there is only one nation, only one town and therefore only one flag", thus ignoring the Identity of millions of Chileans who proclaim their identity as an indigenous people. 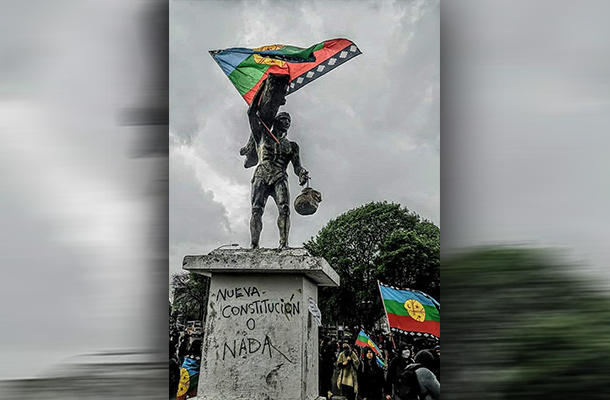 At the intersection of Manuel Montt Street with Caupolicán Avenue, in the downtown sector of the city of Temuco, is the monument to Caupolicán, legendary military leader of the Mapuche, an indigenous people who inhabited the territory of what we know today as Chile. It was this leader who led the resistance in the sixteenth century and faced the Spanish conquerors with such fierceness that on many occasions the Europeans were overwhelmed.

The monument shows an indigenous Mapuche man holding with his right arm a heavy trunk over his shoulder. It refers to the way Caupolicán managed to be chosen as Toqui by the Mapuche people. 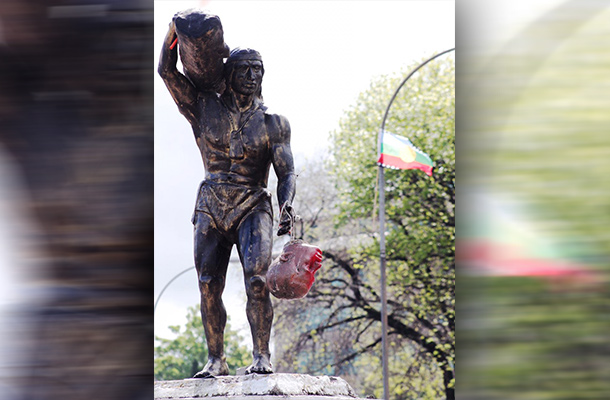 After several defeats suffered before the forces of the Spaniards, the Mapuches met in a Grand Council with the aim of unifying their military command, Paicaví, Lincoyán, Elicura, and Caupolicán participated, the test was to hold a heavy tree trunk on their shoulders for two days and two nights to show his determination, strength, and fierceness before the chiefs Tucapel and Rengo, chaired by Colo Colo. We already know who won the dispute, a Mapuche without peer, one-eyed since childhood, according to legends, Caupolicán, with an unwavering determination that would give many problems thereafter to European invaders.

"With disdain and confident show,

grabbing the hard and gnarled trunk,

as if it were a delicate rod,

He puts it on the powerful shoulder:

of seeing the strong body so nervous. ” 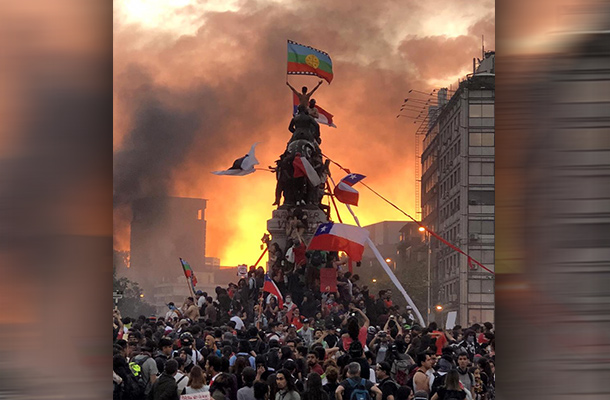 This is how Caupolicán won the rank of “Toqui”, a title that was given to the Mapuche military leader, but which also meant the head of the stone ax that distinguished the chiefs as the insignia of command.

Also in the capital of Araucanía, the city of Temuco, today, stood the bust of Pedro de Valdivia, Spanish conqueror who, under the title of Lieutenant Governor of the Captaincy General of Chile by Francisco Pizarro, founded the The main Chilean cities of today, later he would be Governor and Captain-General waging a merciless war against the Mapuches for breaking his tireless struggle for his land, his identity and his right to exist large, respected and free.

In 1553, Valdivia was arrested by the Mapuches, tortured and killed by them by cutting off his head after several days of suffering. As the current protesters in Chile did with their bust, they cut off Valdivia's head for the second time.

Within the framework of the demonstrations that have been in Chile for weeks, the citizens attacked the bust of the Spanish conqueror and not only threw him down, cut his head and painted it red simulating spilled blood, put it with wire hanging from his hand Caupolicán left as a sign of the claim of the Mapuche cause in the territory, a sign of how Chileans want their own identity to be recognized, such as Mapuches, a manifestation of the desire to subvert the colonial order of the old city of Temuco. In addition, they raised the forbidden flag, the Wenufoye flag, the official Mapuche flag.

Pedro de Valdivia, the European invader who made so many mutilations to shatter the behavior of the Mapuches, will go down in history being the only Spanish conqueror who was beheaded, not once, but twice by the Mapuche Indians.