Salvadoran students are looking for different strategies to receive their classes virtually .

Two girls receive classes from a tree after the crisis of the pandemic and distance schools. / Photo: TW / AFPespanol

In the middle of the mountain where El Cantón is located, a town in the province of the Department of Ahuachapan to the west of El Salvador, Matilde and Marlene Pimentel Álvarez look for internet signal in the highest part of the mountain to be able to take their classes during the confinement that their country is living.

Early in the morning, they take a couple of folding chairs, a table and two umbrellas to make a makeshift classroom on the mountain where the internet signal is better, but when it fails, they have to climb a tree where the signal becomes much better.

It was just at a moment like those, in which the couple of young people were up in a tree and were seen by a police officer who was patrolling the El Tigre mountain and surprised by the situation, he asked them what they were doing there, and both of them answered him : "We just want to study." Given the laudable response and very moved, he took a picture that went viral.

Matilde, 22, studies mathematics and her sister, 19, statistics, both are part of a family of 10 siblings, they will be the first to graduate and that is why they put all their efforts to get ahead regardless of the conditions.

Interviewed by AFP in Spanish, Matilde says that "at home there is no good signal and we should look for a better place to take the classes, but sometimes the signal is not the best and the classes are difficult or impossible to hear " explains the Salvadoran student.

Marlene considers that it is difficult to study in this way and that not only they have this problem, many people, according to the student, suffer from the lack of an internet signal; "If they can do something to improve the situation they should do it because this is just the moment when we need it," she concluded.

Every morning is a journey, the students walk a kilometer between the mountains and the vegetation and when the signal fails it is time to climb the olive tree that supports them between its branches, they admit that they fear falling and are also afraid of animals who live in the forest but their desire allows them to overcome everything.

Also read: One in three children in the world is contaminated with lead

When they are not studying , the sisters sell bread on weekends to help their father, who grows sweet corn, beans and squash.

The story of Matilde and Marlene in Salvador has been repeated throughout the world since the pandemic began. Children and young people like them do not have the technological tools such as the internet to be able to receive remote classes, so they multiply their efforts to receive quality education without achieving it in most cases.

The covid-19 pandemic has deprived 463 million children of school education who have not been able to follow distance classes during the closure of their schools, according to a report from the United Nations Children's Fund (UNICEF) published recently.

"The large number of children whose education has been completely interrupted for months is a global educational emergency , " the director of that UN agency, Henrietta Fore, warned in a statement, warning that the repercussions could be felt in economies and societies in the next decades.

The UN estimates that almost 1.5 billion children were affected by school closures or lockdowns, many of whom do not have the possibility to follow classes from a distance.

At the beginning of August, the United Nations called on all countries to prioritize the reopening of their schools as soon as they have controlled the local transmission of the coronavirus, warning that their prolonged closure could cause a “generational catastrophe” .

The German platform Statista published the map of the global closure of schools due to the pandemic. 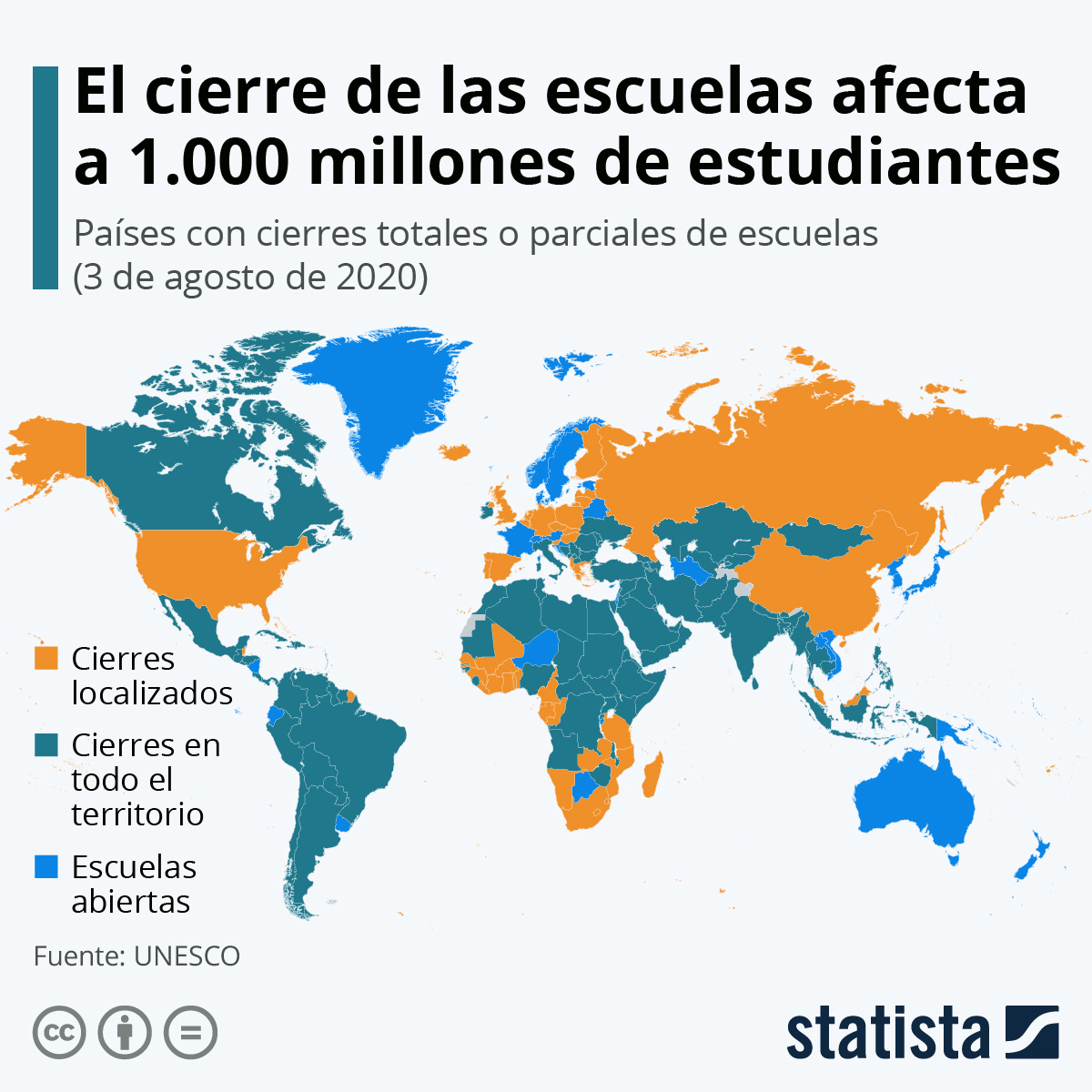