2.4 million Venezuelans have left their country to other Latin American nations, with Colombia receiving the most migrants 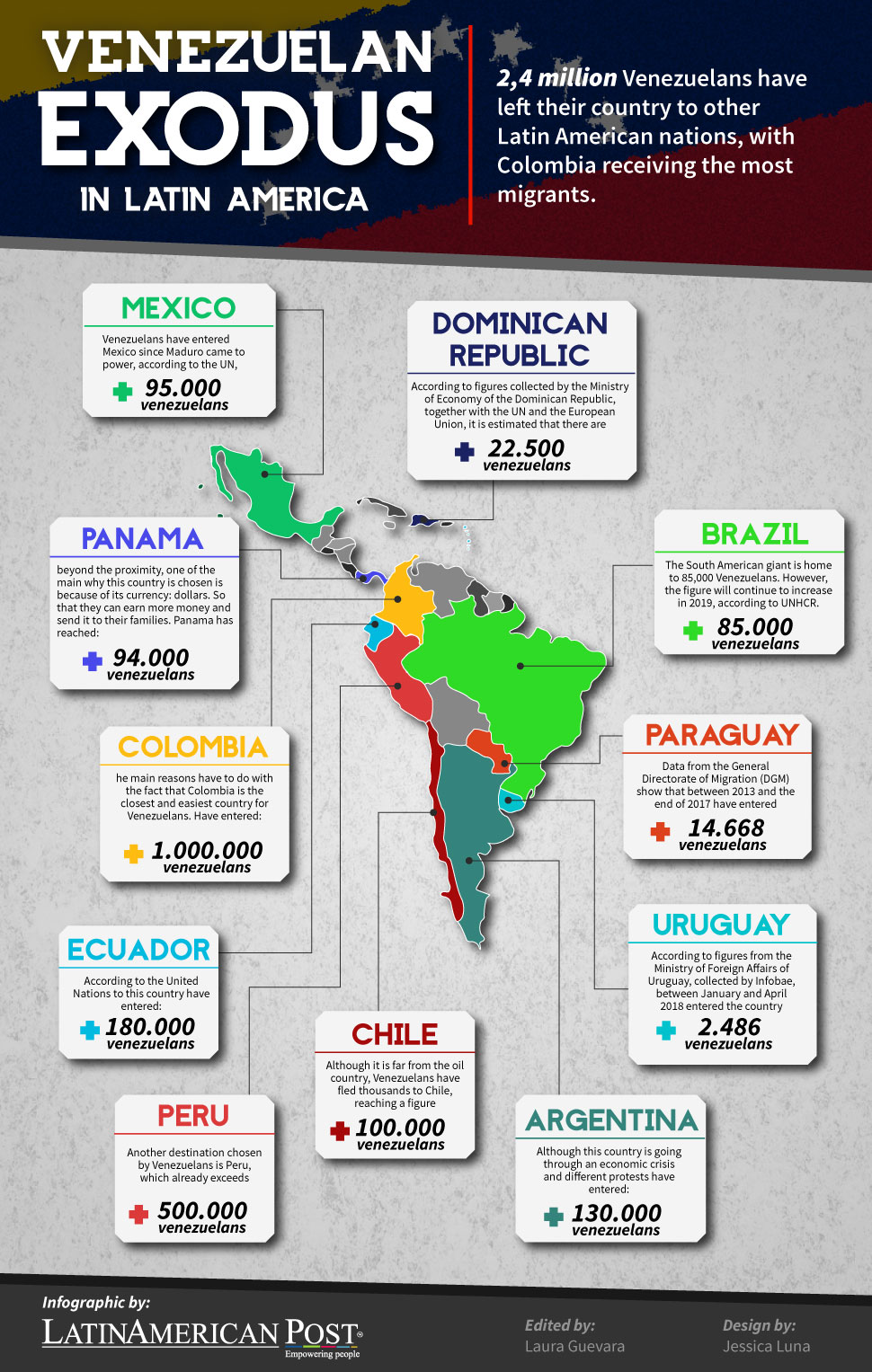 Chavism regime, that Nicolás Maduro still maintains, is ruling over Venezuela for almost 20 years. Because of that, the country plunged IGNORE INTO an economic, social and political crisis. With it, thousands of Venezuelans had to leave their country in a stampede to other territories where they find a better quality of life.

November’s numbers, based on the United Nations Agency for Refugees, UNHCR, reveals that there are already more than 2.4 million Venezuelans who have escaped to several Latin American countries.

These figures, reported in Latin America, corresponds to estimated and not accurate data of the United Nations Agency for Refugees, the International Organization for Migration and the count made by migratory entities from the different countries where the Venezuelan population has emigrated.

Since Maduro came to power in 2013, the exodus of Venezuelans closes this 2018 exceeding one million. The main reasons have to do with the fact that Colombia is the closest and easiest country for Venezuelans to go to.

The figure will increase little by little and with it, Colombia’s government need to face different challenges. Now, the government needs to take care of health, food and possible jobs.

Another destination chosen by Venezuelans is Peru, which already exceeds half a million migrants.

According to the United Nations to this country, more than 180,000 Venezuelans have entered.

Although this country is going through an economic crisis and different protests against the lack of resources for public higher education, 130,000 Venezuelans have arrived in this country.

Although it is far from the oil country, Venezuelans have fled thousands to Chile, reaching a figure of 100,000.

Another nearby destination, but not before passing through Colombia, is Panama. But beyond the proximity, one of the main why this country is chosen is because of its currency: dollars. With this, thousands of Venezuelans go to Panama, so that they can earn more money and send it to their families. Panama has reached 94,000.

The South American giant is home to 85,000 Venezuelans. However, the figure will continue to increase in 2019, according to UNHCR.

Eduardo Stein, the special representative of UNHCR and IOM, highlights that although the aforementioned Latin countries have "maintained a broad policy of opening the doors to Venezuelan migrants", he acknowledges that the challenges to address the migratory crisis are greater and they could present access limits.

However, he has extended its call to the international community to join efforts and support the Latin countries that have attended the Venezuelan exodus, as reported by France 24.

More than 95,000 Venezuelans have entered Mexico since Maduro came to power, according to the UN.

According to figures collected by the Ministry of Economy of the Dominican Republic, together with the UN and the European Union, it is estimated that there are 22,500 Venezuelans who entered the country between 2012 and the end of 2018.

According to figures from the Ministry of Foreign Affairs of Uruguay, collected by Infobae, between January and April 2018, 2,486 Venezuelans entered the country in search of work and a better quality of life, which Uruguay offers them.

Data from the General Directorate of Migration (DGM) show that between 2013 and the end of 2017, 14,668 Venezuelans joined in the wake of the political, social and economic crisis that Venezuela is going through.

Although it is a destination that contrasts little with the number of migrants that have left the oil country to Peru and Colombia, the figure is considerable.